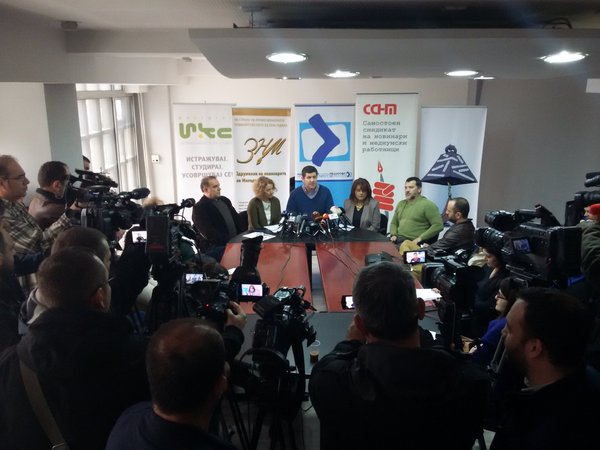 Five journalists and media organizations, including the Association of Journalists of Macedonia, the Independent Union of journalists and media workers, the Macedonian Institute for Media, Council of Media Ethics of Macedonia and the Institute of Communication Studies, in the upcoming period will work together to convince all the responsible authorities to undertake reforms in the media before the elections scheduled for June 5th.
Therefore, these organizations on Friday submitted a request for a meeting with the President Gorge Ivanov, Parliament’s speaker Trajko Veljanoski and the political party leaders, signatories of Przhino agreement.
As journalists we want to take our share of responsibility to work together with all interested institutions to secure free and professional media.
The President has important powers in foreign policy and is responsible to for the good image of the country in the world. On the media freedom index of Reporters Without Borders and of Freedom House, Macedonia is in a group together with African countries with massive media freedom violations. We want to work with the President in order Macedonia to identify itself as free and democratic country to the world.
Macedonia’s constitution guarantees freedom of expression and freedom of the media. The Parliament passes the Constitution and takes care for consistent implementation of its provisions. Therefore, the parliament should play a larger role in the efforts to improve the media situation in the country.
From the leaders of the four major party, VMRO-DPMNE, SDSM, DUI and DPA, Gruevski, Zaev, Ahmeti and Thaci, we seek explanations why negotiations on media reform failed. Were the cats of the European mediator a problem for the parties or they did not like his proposals for systemic reforms in the media system.
These leaders, as signatories to the agreement of Przhino committed themselves to implement major reforms in the media. Without these reforms, Macedonia will have no free or credible elections, and will not come out of the political crisis.
The recommendation of European Commission for starting of accession negotiations is conditional. It may be withdrawn if the political parties do not fully implement the agreement of Przhino and not implement the urgent priority reforms required by the European Union.
We insist that the US and the EU to be involved in the negotiations as before and that their proposal, based on our views, be the basis for finding a solution.
Our main request are banning government advertising, MRT and Media Agency released from the control of the government and to ensure their stable funding, reduce liabilities and penalties for private media and greater transparency of the institutions.
Once again we want to assure you that in the struggle for free and professional media we will be consistent and united.

Media and journalists organizations in a meeting with President Ivanov