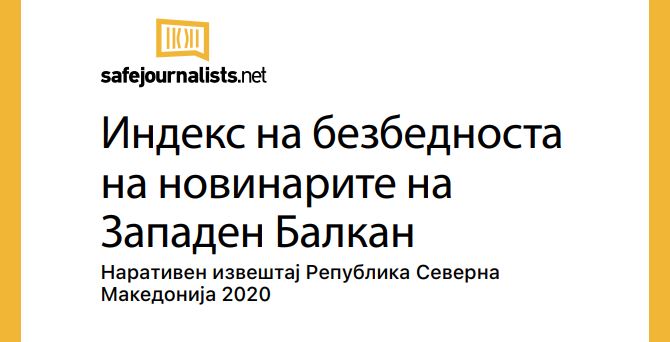 The index refers to 2020 and relies on research data, collected, and analysed by the partners of the Western Balkan Journalists’ Association platform “Safejournalists.net”, based on a rigorous research procedure. The data collected on several different areas related to the “safety of journalists” were prepared in the form of an indicator – Journalists’ Safety Index, in order to measure the changes in the seven Western Balkan countries for the last year.

According to the index, the Republic of North Macedonia, compared to the seven countries in the Western Balkans region, shows an improvement in the security situation of journalists and media workers. However, in terms of prevention measures in the country, the index states that the general policy of impunity for attackers on journalists continues. Due to this, AJM continuously insists on special departments in the criminal court and the prosecution to increase the efficiency in the protection of the rights of journalists. The number of attacks in 2020 compared to the previous year has been increased and more than half are against women journalists.

The reference values for the index range from 1 (worst) to 7 (best) in four separate areas. Out of the 7 countries in the Western Balkans, the Republic of North Macedonia has an average score of 3.93, which, although not high, still makes the country better than the other countries involved in the process.

In the coming years, the improvement or deterioration of the situation in all countries will be measured considering the assessment for 2020 as a reference year. More details on the theoretical framework and the procedure for developing and calculating the Index, as well as all reports on the Western Balkan countries, can be found at: https://safejournalists.net/safety-index/.

The Western Balkans Journalists’ Safety Index is published in Macedonian and English language.