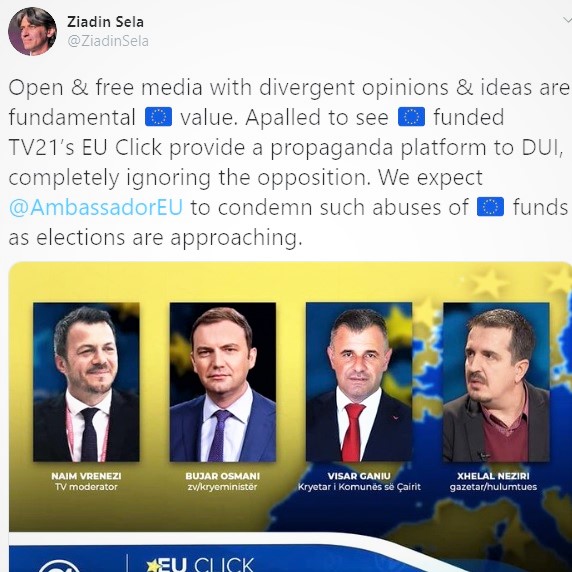 The Association of Journalists of Macedonia condemns the attitude of the leader of the Alliance for Albanians, Zijadin Sela, for the status posted on his Twitter account in which he accused TV 21 of serving as DUI’s propaganda platform while using EU funds.

This tweet posted by Sela followed after EU Click, which is a TV emission supported by the Nordica project, hosted Bujar Osmani as National Coordinator for Foreign Assistance, and Visar Ganiu, Mayor of Chair who recently resulted in positive on the Covid-19 test.

According to TV 21, during the last month, AA representatives have appeared several times on different programs of this television. Therefore, we believe that Sela’s tweet is a dishonest attack on the media’s editorial policy and direct pressure on journalists working on the show EU Click.

This is not the first time that TV 21 has been the target of threats and labeling by local politicians, and such attacks are particularly frequent during election campaigns. We point out that it is not the job of politicians to publicly comment on the professionalism of the media. If they have objections to their work, they should submit complaints to the Council for Media Ethics in Macedonia or to the Council of Honour of AJM.