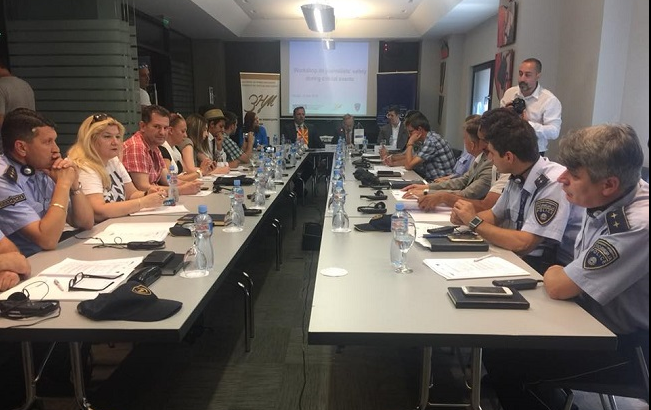 The Association of Journalists of Macedonia in cooperation with the Ministry of Interior and the OSCE Mission to Skopje held a workshop dedicated to the security of journalists when reporting from high-risk events.

President of AJM Naser Selmani said that the training will help the police to better understand the role of the media which is to inform the citizens about different protests and that will help to avoid incidents. “Unfortunately, there have been examples in the past when police members for unclear reasons attacked journalists who were reporting from protests. Police should learn that journalists are not their enemies, but they are also professionals on duty, which should be protected in case they are attacked by the protesters,” Selmani said.

He said that joint training on the safety of journalists during events of high risk should increase mutual trust and cooperation between the police and journalists in order to find solutions that will enable both sides to smoothly fulfill their tasks without interfering with each other.

Minister of Interior Oliver Spasovski reiterated the government’s commitment to zero tolerance for the attacks on journalists. “Any attack on journalists will be most severely condemned and sanctioned. From June 1, 2017 until today we have registered 12 cases in which the safety of the journalists was endangered and all of them are cleared by the Ministry of Interior,” Spasovski said. He also called on other institutions such as the judiciary and the public prosecutor’s office to contribute to increasing the safety of journalists and freedom of speech.

The head of the OSCE Mission to Skopje, Jeff Goldstein said that in the framework of this cooperation, six trainings were held in different cities in Macedonia. “One thing we learned from these workshops is that open dialogue between police officers and journalists is possible and very useful for both groups, but also for the public,” he said.

According to him, the institutions, except for the new attacks on journalists, they should clear the old attacks as well, in order to bring the attackers to justice.

Reform of the MRT with more money and less political influence