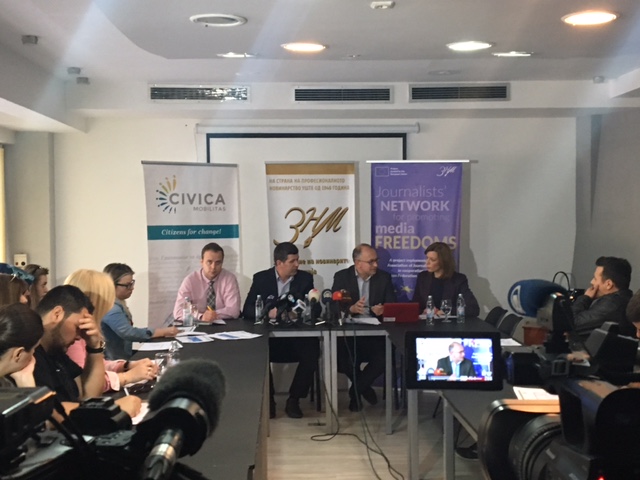 Also, we asked our colleague Gutiérrez to share with us his European experience regarding the idea of the political parties, which, through their branches in the civil sector have put a lot of pressure on the public for legal regulation of the internet portals and regulation of media content.

On Saturday the Association of Journalists of Macedonia held its Annual Assembly, where reports for the work of AJM were presented and A Declaration for the Bad Media Condition in Macedonia was unanimously adopted.

The most prominent message that this Declaration brings is the fact that Macedonia is the last country in Europe for freedom of speech, not because of lack of legal regulation of internet portals and media content, but because they are subject to severe pressure by the authorities, who use power and corruption to control the media and limit the freedom of speech.

The journalists condemned the policy of non-punishment of attacks on journalists. The number of attacks increased last year, which is clear evidence of escalation of violence. Half of 45 reported attacks in the last four years happened in 2016, and only in the first three months of 2017 there were five new attacks. We call upon the institutions to punish the perpetrators or take the responsibility for any possible consequences.

The Assembly of AJM is clearly against the legal regulation of internet portals and media content because we are convinced that with strict laws we will not free media from state control. There is no doubt for us-more laws means less freedom.

The negative tendencies in the media, such as hate speech, do not result in a lack of laws, but of the institutions refusing to apply them. The Prosecution declined as ungrounded the initiatives of the AJM and AAVMS to sanction the hate speech on the social networks and in the media.

The AJM rejects with indignation the silly idea of regulation of media content. Every professional journalist is to refuse their work to be evaluated by the state. In the free world, the journalist ethics is resolved with self regulatory mechanisms and not with interference of the state, which plays the role of chief editor of the media and executes fines on the journalists who do not act according to their instructions.

Press release of the President of AJM, Naser Selmani

Call for ending the violence against the journalists