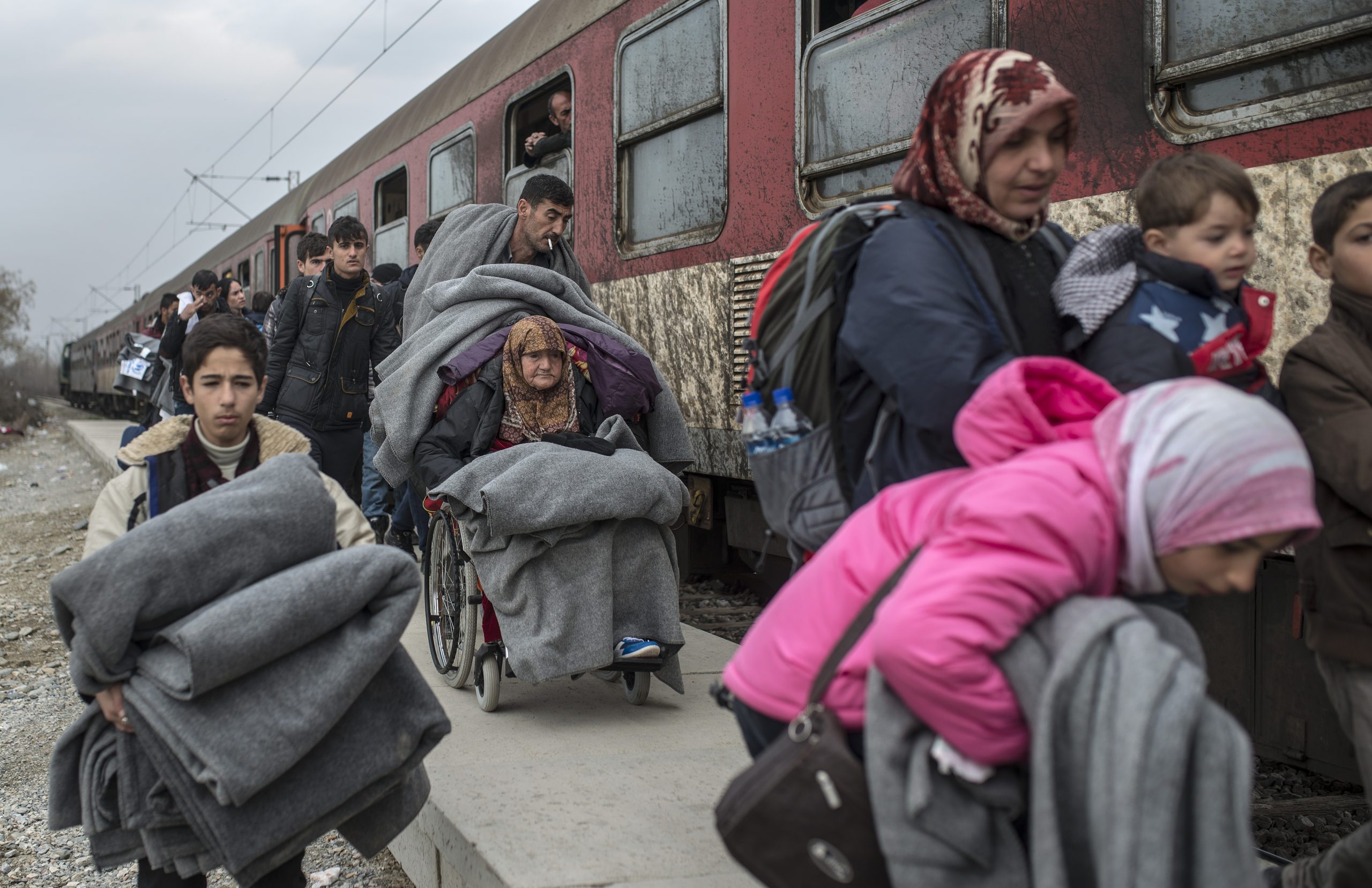 A railroad, for someone common cold iron on which a train passes, for someone a bed on which they dream of warm home, for others bridge that connects the past and the life from which they fled and the future and the desire for better tomorrow. Moving to unknown countries and new locations, the best signpost for migrants is the railroad. Following them, they have some certainty that they will not get lost in the place, as they lost their home, families, identity…

On the one hand, they are victims of smugglers who earn money at the expense of their plight, and on the other hand, some of them are aggressive refugees who even resort to theft. I had the opportunity to see them up close, on the railroad near Lisiche. It was a warm day, spring, and they were stepping on the railroad pebbles with cold steps. Their shadows were refracted by the sun, but they did not notice either their reflection on the light or the sun …

Several adults, holding in their arms two children (sheer estimation, not older than 5 years) and behind them older man with disability, who walking on crutches, tried to catch up with them. They had only one goal, to reach the final destination in the EU countries faster. Fleeing from poverty or war…

“They failed to understand me much. I tried to get close to them, but as much as I was afraid of them, they were also afraid of me. I tried gestures, waved at them, but they turned and continued at accelerated pace. Only one of them waved at me, pointing at the railroad direction. There was no signpost on the rails, no signs that could warn them that walking on the rails could be dangerous, even fatal,” said citizen who often encountered migrants.

I could not hear what language they spoke, nor could I try to ask them where they came from and where they were headed in a language they might understand. The older ones had sadness and hope in their eyes at the same time. Only the children eyes were closed. They slept in their arms, where they felt safest. And in the dream their hands held firmly the adults, who in turn, carried bags on their backs in which they probably packed their whole lives.

For some of these people, the railroads are hope for a new direction and a better life, some of them walk on the railroad tracks with fear not to get lost, while others, tired of walking, fall asleep on the cold iron and while dreaming for soft pillow lose their lives right in the dream while sleeping.

Starting from the end of 2014 until the end of September 2020, total of 39 migrants lost their lives on the territory of North Macedonia.

According to the country of origin, seven people are from Syria, five from Afghanistan, three from Bangladesh, two from Pakistan and one from Morocco, and the rest have not been identified. Most of the dead migrants died in train accidents, as many as 30. Then, five migrants lost their lives in traffic accidents caused by drivers – smugglers, three drowned while trying to cross Suva Reka, near the village of Moin in the vicinity of Gevgelija, and a person without signs of life was found in the abyss along the highway Udovo – Demir Kapija. In April 2015, a train near Veles killed 14 migrants, including minors. Another juvenile migrant was run over in May, on the railroad near Demir Kapija. These people are also victims of human trafficking, but often are not even aware of their vulnerability and involvement in the human trafficking chain.

The Ministry of Interior explains that in cases of detected criminal acts of migrant smuggling, the guidelines of the Public Prosecutor’s Office and the national legislation are acted upon. The location where the foreigner will be accommodated during the procedure (Reception Centre for Foreigners, Temporary Transit Centres, Safe houses, hospital treatment, if needed, etc.) is decided on case-by-case basis, based on several factors (circumstances in which the person was found, age, health and psycho-physical condition, marital status, whether the person is from vulnerable category, etc.).

Migrant smuggling is common in our country. In the period from January 1, 2018 to November 18, 2020, in the Basic Criminal Court in Skopje, cases were resolved for 184 accused of smuggling migrants. Out of these, the verdicts for 117 persons are final, out of which for 70 the verdict was passed on the basis of guilty plea.

The last major action of the Ministry of Interior, in which migrant smugglers were detained after searches of buildings in the area of ​​Gevgelija, Skopje, Shtip and Kumanovo, took place last month. 10 people were detained. The group in the period from December last year to last month, transported more than 100 migrants, and charged from 500 to 700 euros for the services.

Article 29 of the Constitution of the Republic of North Macedonia stipulates that foreigners enjoy freedoms and rights guaranteed by the Constitution, under conditions determined by law and international agreements.

Nazmi Maliqi, professor on security, explains that the displaced persons are citizens who, due to the crisis in their country, i.e. for fear of being persecuted due to their race, religion, and social group belonging or political beliefs, seek refuge in another country, and en masse leave their country.

“It is known that the citizens of our country have always had one feature – humanity. It has been proven throughout all times in this Macedonian area. During accidents and troubles, during disasters and non-existence, regardless of the arrangements and systems, the citizens had this feature, to help people. The biggest confirmation of that was the acceptance, accommodation and care for the displaced persons who after the disintegration of the former SFR Yugoslavia, to save their lives, came and found security and shelter right here. The Crisis Management Centre and the reports that this body publishes on its work, play important role for migrants. In addition, second and very important source are the monthly and periodic reports of the UNHCR office in Skopje regarding the evolution and observance of the Convention by the signatory. States that have ratified the Refugee Convention are obliged to protect refugees in their territories, subject to the conditions contained therein. The most important change in the legislation, whose sole purpose was to mitigate the impact of the refugee and migrant crisis, is the Law on Asylum and Temporary Protection of 18 June 2015. This change enabled the “legalization” of the status of refugees and migrants transiting through the country, providing legal basis for their presence on its territory, as well as the use of public transport and humanitarian aid. Prior to the entry into force of this amendment in the legal framework, refugees and migrants entering the territory of the Republic of North Macedonia (especially those who did it outside the legal international border crossings) had only one legal opportunity – to apply for asylum on the territory of the Republic of North Macedonia”, said Professor Maliqi.

How the illegal transport of migrants affects and what would be the damage to the state and the citizens, the professor adds, the application and respect of the rights of refugees in transit in our country, respect and taking care for all measures to implement the decisions of conventions and agreements for the rights and benefits of refugees, are the key forms around which this issue will be developed, which in form is brief but realistic reflection of all developments from 1991 to 2016.

Regarding the Balkan route and whether our country is ready to receive migrants, Professor Maliqi added that the vast majority of refugees and migrants who entered our territory continued their journey through the so-called “Western Balkan route” towards the selected countries in Northern and Western Europe.

“Out of the total number of 477.876 registered refugees and migrants found on the territory of our country, in the period between June 19, 2015 and March 7, 2016, only 115 people decided to apply for asylum. In addition to the described legal changes, we are implementing number of policy measures provided by the existing legislation, mainly in the context of crisis management mechanisms. In this regard, on August 19, 2015, the Government adopted decision on the existence of crisis situation along the southern and northern borders. In accordance with this decision, the Crisis Management Centre has activated its headquarters and adopted Action Plan for prevention and management of the entry and transit of migrants through the territory of the country. Moreover, this decision enabled the Army to provide adequate assistance to the police forces in their efforts to secure the borders and control the entry of refugees and migrants on the territory of the Republic of North Macedonia. This decision of the Government was later approved by the Assembly, according to the procedure established in the crisis management legislation. According to the decision of the Assembly, the duration of the crisis situation has been extended until June 15, 2016. Later, it was further extended until December 31, 2016,” said the professor on security.

Maliqi added that in addition to providing basis for the Army to assist police forces in the border security process, declaring the state of crisis has enabled the mobilization of additional human and technical resources in efforts to manage refugee transit.

Such mobilization enabled the establishment of transit camps for refugees along the southern and northern borders, where migrants and refugees are provided with the necessary humanitarian assistance, and enabled the construction of temporary physical barrier (two-layer fence) along the southern border, which significantly reduced the possibilities for uncontrolled and unregistered crossing of the border between the Republic of North Macedonia and the Republic of Greece.

Author of the photos: Robert Atanasovski