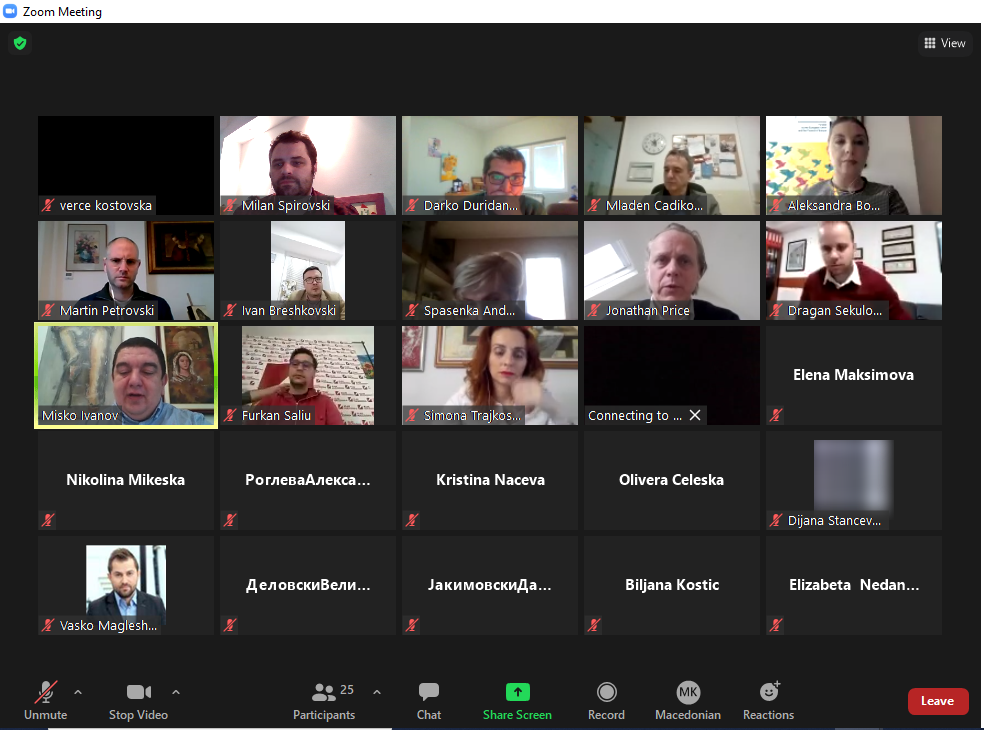 The Association of Journalists of Macedonia (AJM) have organized a webinar on February 11 to continue the previous event from November 2020 on the topic: “Amendments to the Criminal Code: Solutions for strengthening journalists’ safety.” The webinar was attended by thirty participants, including journalists, experts from the Council of Europe, representatives from the Basic Public Prosecutor’s Office, a Ministry of Justice representative, and lawyers representing journalists at the courts.

The main conclusion at the event was that only through concrete amendments to the Criminal Code but also the Law on Criminal Procedure by giving greater competence to the prosecution and the Ministry of Interior to act ex-officio and by increasing the sentences for attackers, the security and policy of impunity for journalists and media workers will improve.

The President of the Association of Journalists of Macedonia, Mr. Mladen Chadikovski, expressed his dissatisfaction in his introductory speech because things were still stagnant and stalled reforms. However, the same things that need to be changed have been repeated several times in the last year. “There is still increasing trend in the numbers of attacks and verbal threats against journalists, and impunity remains. “It would be a great success if instead of attacks on journalists being the rule, we would change them to be an incident that will be punished.” – Mr. Chadikovski pointed out.

Ms. Aleksandra Bogdanovska – Senior Project Officer of the project Freedom of Expression and Freedom of the Media in the Republic of North Macedonia – JUFREX, also addressed the audience. She encouraged such activities and initiatives to strengthen journalists’ security, and security is one of the essential preconditions for the journalistic profession. Obstructing journalistic work is invaluable for any society.

Mr. Jonathan Price also addressed the webinar. He is an expert in the Council of Europe and a lawyer at “Doughty Street Chambers,” from the UK. He pointed out his proposals for improvements and harmonization with European standards in amendments to the Criminal Code in the Republic of North Macedonia. He stressed that it is crucial to overcome impunity and raise journalists’ status in the Criminal Code. It is essential that the public prosecutor’s office does its job and initiates proceedings to promote journalists’ protection by the institutions.

As one of the panelists, Ms. Spasenka Andonova (Basic Public Prosecutor), addressed at the webinar. She emphasized that they are obliged to respect the legislation as a representative of the prosecution. She pointed to hate speech as an example of communicating with discriminatory elements most often used against journalists and media workers. She pointed out that, unfortunately, the number of reports for damaged journalists is a process that is on the rise. Faced with some criticisms of the Ministry of Interior and the prosecution for insufficient activity in investigating and not bringing the case to court, she stressed that the public prosecutor must not go beyond the legislation imposed on him. The report to the prosecution represents the initial act that starts the public prosecutor’s actions and work. More pieces and the abundance of specific information will shorten the collection procedure’s time and investigation. She emphasized the support of this process in improving the legislation by using previous amendments to the Criminal Code to give form and content for more efficient and effective action of the Public Prosecutor’s Office in protecting journalists’ safety.

Mr. Furkan Saliu, a journalist from Klan TV, shared his experience reporting and reacting to AJM for his safety and the threats he has received in the past. The field results indicate that the Ministry of Interior and the Basic Public Prosecutor’s Office are not doing their job, he said. Colleague Saliu appealed that journalists’ profession must be promoted to support the institutions and improve the practice after a case is reported, whether in AJM or in the Ministry of Interior for threatening a journalist institutions must react the interest of the security of journalists immediately.

Mr. Ivan Breshkovski, a lawyer, stressed that the prosecution must take official action. Violent crime, the torture that journalists face, has a different motive compared to the ordinary crime. It is essential to prove the motive for the offense for the prosecution to act. It is necessary to toughen the penalties or insert a more prominent form of a misdemeanor to protect the CC lawyers. Another problem that needs to be pointed out is when it comes to online threats, to pay attention to whether the threats are party or state officials. There the prosecution must initiate official actions. Recently, it is a noticeable fact that more and more journalists are victims of threats. It is necessary to make an encouraging appeal to journalists that there are more and more funds that can cover the costs and more and more journalists to file criminal lawsuits.

This text was prepared with the financial support of the European Union and the Council of Europe. The views expressed in the text do not necessarily reflect the views of either party.

AJM, SSNM, MIM and CMEM: The election of the bodies in MRT and AAAVMS with a simple majority is risky