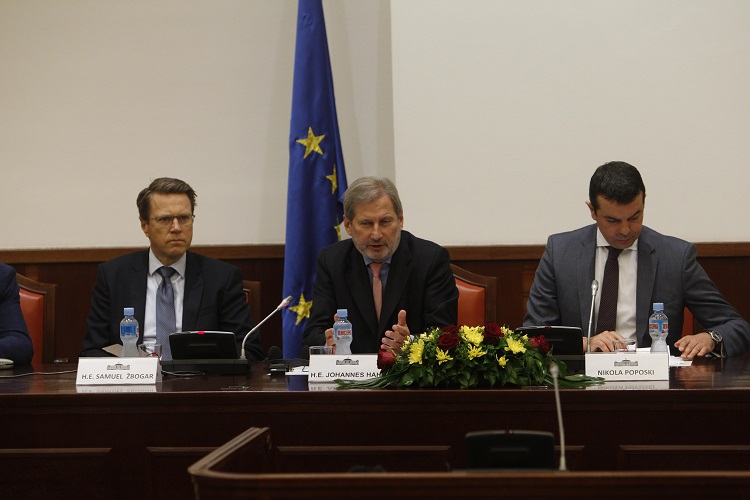 The National European Integration Council met today in the Parliament and EU Commissioner Johannes Hahn was also there, who formally inaugurated the start of the screening process for the country’s readiness to start accession negotiations.

The President of the Association of Journalists of Macedonia, Naser Selmani, who is member of the Council as a representative of the civil sector, held a speech at the session.

In addition you can read his full speech:

On behalf of the Macedonian journalists, I would like to send several messages to the distinguished guests.

The first one is to Commissioner Hahn. I am glad that the awareness in the European Union that the Balkan countries are part of Europe is strengthening. The roots of European civilization are in the Balkans.

I ask from You, in the forthcoming period in the process of Macedonia’s accession to the EU, to pay more attention to media reforms. Free and professional media are the oxygen for any democracy, and the Macedonian democracy needs a lot of oxygen. Professional media is the best weapon against the abuse of power of any Government.

The second message is for the Government. There is a change in the media sector, but those changes are far from being sustainable. We as a journalist association cooperate and will continue to cooperate with you, but we must agree on several basic principles.

The policy of impunity for violence against journalists must end. The number of attacks has dropped in the past year, the police is clearing the attacks more efficiently, but unfortunately, none of the perpetrators has been brought to justice.

The MoI claims that it can not renew investigations for the old attacks on journalists that occurred in the time of the previous government because the investigations were made unprofessionally and in some cases even evidences was destroyed. If the investigations can not be restarted, then you can ask responsibility for the police officers who conducted poor quality investigations and destroyed evidence.

Do not hide behind the prosecution for the policy of impunity for the attacks against journalists. The new prosecutor was elected by the new government, you should sit and talk to him about speeding up the investigations in which journalists were victims.

Your approach to the reform on the public service is wrong. There cannot be a good reform with less money for the MRT. Last year, you reduced 40 percent of the MRT’s budget, and now you will give new three million euros with the re-balance of the budget. This confirmed our suggestion that 12 million euros annually for the MRT are not enough to strengthen its’ independence and improve the quality of the program. The funding system must be free of political influence and it must not depend on the will of the government.

The third message is for the opposition. Do not block the adoption of the Law on Audio and Audiovisual Media Services because we assure you that the proposed amendments, with the exception of the model of financing the MRT are good for the media. Your vote will decide for the election of the new governing bodies in MRT and the Media Agency because according to the law they will be voted a majority of two-thirds in the Parliament. Let this law pass because you have plenty of other laws where you can negotiate with the Government.

The last message is for my colleagues. Greater freedom means greater responsibility. In your work you should apply the principles of the Code of Journalists.

AJM requires courts to apply, not to interpret laws

Condemnation of the incident with photographers in the Parliamentary Club