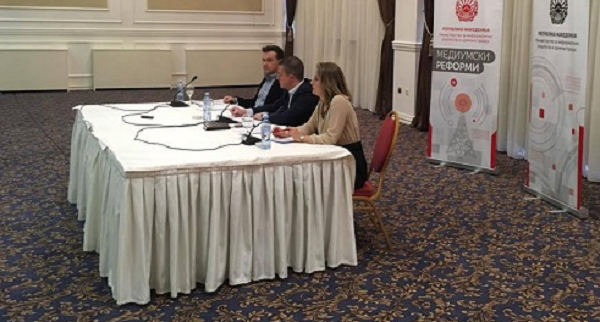 The Ministry of Information Society and Administration yesterday in Skopje organized a debate on the Draft Law on Audio and Audiovisual Media Services.

AJM President Naser Selmani accused the Government that by attempting to impose fines on unethical media reporting they try to put censorship, which is banned by the Macedonian constitution. Selmani explained that the Government is eager to put a hand on media content and play the role of editor-in-chief and tell reporters what is ethical and what is unethical reporting.

“You are inconsistent in your views, on one hand you say that you support self-regulation in the media, and on the other hand you propose penalties for journalist’s ethics. What will the Council of Media Ethics and the Council of Honor of the AJM work if You tell the journalists how they should write. You will penalize the media with 5.000 euros, and the responsible person with 1.500 euros. By doing so, you practically introduce censorship”, Selmani said, adding that people who participated in writing this article of the law are not only major enemies of freedom of speech, but also directly work against the credibility of this Government that wants to be shown as a reformatting Government.

He says that if the fines for ethical reporting are not deleted, Macedonia risks to break the European Convention for Human Rights, which i obligated to respect as a member of the Council of Europe. “Article 10 from the Convention defines when the freedom of speech can be restricted. With this article you are going out of those frames and you are introducing new limitations”, Selmani warned.

Minister Robert Popovski promised that Article 61 will be deleted if journalists’ associations demand it. “We are opened to delete Article 61, but consider what it will mean”, Popovski noted.

As for the financing of MRT, Popovski said that they are thinking to find a solution that will increase the percentage of the budget each year for financing the MRT until it reaches the desired one percent.

Selmani, at the end of the debate, saluted the readiness of the Government to delete the fines from the Article 61 and to discuss for a compromise solution for the financing of MRT.