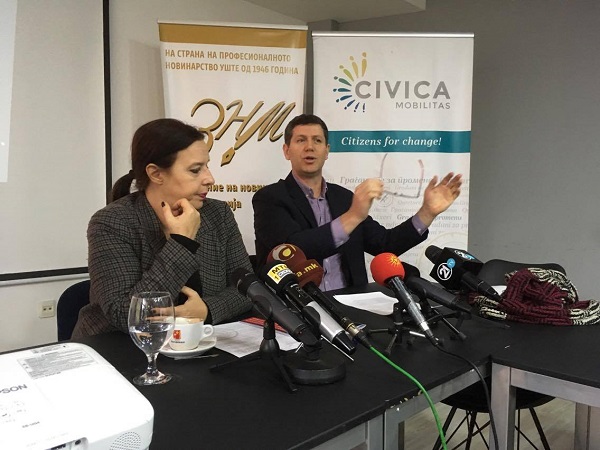 The Association of Journalists of Macedonia and the Institute for Social Sciences and Humanities, today in the Journalists’ Club presented an analysis of the effects of the application of the Law on Audio and Audio-visual Media Services on editorial freedom. The analysis was prepared by expert teams of the Institute and AJM within a project funded by the Delegation of the European Union in Skopje.

The director of the Institute for Social Sciences and Humanities, Katerina Kolozova, presented the findings from the analysis, and said that the Law on Audio and Audiovisual Media Services is too detailed, to infantile, to caricature, to determine which program to broadcast when it is broadcast, etc.

“The law on audio and audio-visual media services limits freedom of expression and, moreover, introduces censorship and self-censorship in the media. The provisions of the law are proof of the phenomenon of a “captive state”, Kolozova stressed, adding that through excessive legal regulation, the executive power is given excessive control over the media.

“The most important conclusion of this analysis is that in Macedonia there is excessive regulation of private broadcasting media. The state interferes too much in the creation of the program of private media, which negatively affects editorial freedom, the program quality and financial stability of the media,” said the President of AJM, Naser Selmani.

Selmani explained that the second conclusion from the analysis is that the professional ethics of the media should be an object of self-regulation, and not to be achieved by the state by introduction of laws and penalties.

He also spoke about the final draft version of the LAAVMS, which the government wants to have the monopoly of the truth. “If this article is passed by the government, it will pave the truth in the future in the media. It will have terrifying adverse effects on freedom of speech and media freedom. It will also step up existing self-censorship and crush criticism in the media,” Selmani said.

Asked about the financing of MRT, Selmani noted that 0.7 percent of the budget of Macedonia, is not enough for MRT.

“If MRT has a debt of 30 million euros, then how will the 15 million euros annually be enough to service the debt? In addition, MRT with a reduced budget will not be able to open a new TV programme in Albanian language, employ quality journalism staff and develop the correspondent network, increase the salaries of journalists, procure new equipment, not to mention the digitization process, which has not yet started,” Selmani said.

According to him, the cooperation between the civil sector and media organizations is very important. “The involvement of the civil sector in the debate on freedom of speech is a wind in our backs to solve existing problems in the media sector,” Selmani said.