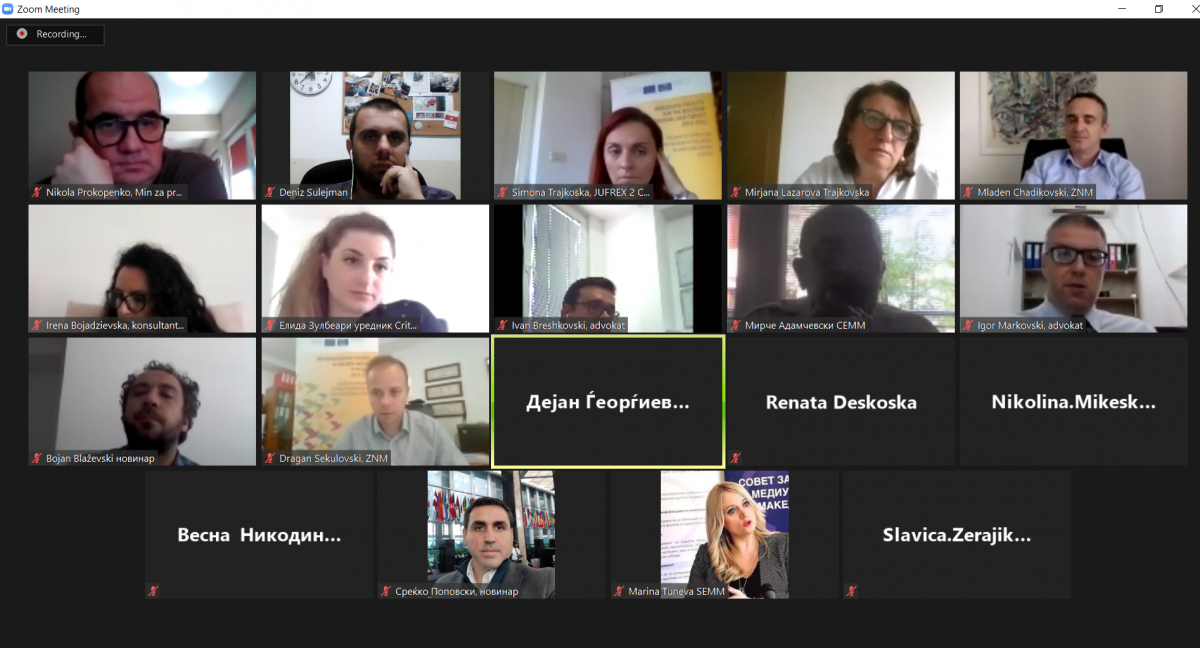 On June 12, 2020, AJM hosted the second webinar on the topic “Sharing knowledge and practices for defamation and insult in North Macedonia as a prerequisite for quality changes in the current law” (Part 2). The webinar was organized by the Association of Journalists of Macedonia and the joint action of the EU and Council of Europe “Freedom of expression and press freedom in North Macedonia (JUFREKS).”

The workshop discussed the Law on Civil Liability for Defamation and Insult and the practice of stakeholders in the implementation of this law. Taking into consideration that most of the participants have practical and theoretical experience with the application of this law, a constructive debate was developed where expertise and information on the topic were exchanged from our country, but also from the region.

The Webinar was opened by the Executive Director of the Association of Journalists of Macedonia, Dragan Sekulovski, who greeted the audience, presented the agenda and announced the four speakers: Judge Mirjana Lazarova Trajkovska, State Legal Adviser Nikola Prokopenko, journalist Srecko Popovski and the editor of KritTink, Elida Zulbeari. In addition, Sekulovski opened the discussion by pointing out that the Law on Civil Liability for Defamation and Insult should be amended, and this workshop is an excellent opportunity to exchange views on this topic with representatives of all stakeholders. According to Sekulovski, the collected views and thoughts from the webinar will be shared with the working group for amending the Law on Defamation and Insult in order to have a quality law that will benefit not only journalists and media workers, but also all citizens of our country.

Mladen Chadikovski – President of AJM, Renata Deskoska – Minister of Justice and Simona Trajkoska, Project Assistant to JUFREKS in Northern Macedonia, had welcoming speeches at this webinar.

The President of the Association of Journalists of Macedonia, Mladen Chadikovski said that one of the main efforts of AJM is to resolve defamation and insult through self-regulation mechanisms. “This is why we created the Register of Professional Online Media (Promedia.mk)” he said. Chadikovski pointed out that the Association of Journalists is committed to minimizing the punishments of journalists for these two acts, and not to include imprisonment or high fines that journalists could not pay, as this could endanger freedom of expression.

Minister of Justice, Renata Deskoska in her speech said that this topic is important not only for journalists but is generally important for any democratic state. She noted that the Ministry of Justice has initiated a process to amend the Law on Defamation and Insult in order to establish a European framework that could be implemented without implying the suffocation of freedom of expression, and at the same time to establish balance with the protection of personal dignity and other rights of citizens.

The project assistant of JUFREKS in North Macedonia, Simona Trajkovska greeted the participants and said that the goal of this project is to promote freedom of expression and freedom of the media in accordance with European standards.

The first speaker at the webinar was Judge Mirjana Lazarova Trajkovska. In her speech, she spoke about the practice of the European Court of Human Rights in terms of freedom of expression. According to her, the ECHR bases the essence of freedom of expression on three extremely important scales or the so-called tripartite test. She shared with the participants three cases from the ECHR that can help improve the law: Selmani and others against Macedonia, Makraduli against Macedonia and Popovski against Macedonia. According to Trajkovska, in order not to cause a chilling effect, the courts must always pay attention to the amount of the fines imposed. “In France, although defamation and insult are part of the criminal proceedings, French courts very rarely impose high fines. In most cases, the fine is only one euro,” said Judge Trajkovska.

State Legislative Adviser, Nikola Prokopenko in his speech, recalled that recommendations from Priebe’s reports and other relevant reports from European institutions. He said that they should be taken into account when preparing amendments to the Law on Defamation and Insult.

The journalist Srecko Popovski was the last speaker on the webinar. According to him, freedom of expression is not only a right but also an obligation of the one who uses that right not to cause serious and irreparable damage to one’s reputation. Popovski stressed that the court should be the last instance to appeal defamation and insult after all possibilities have been exhausted. “The biggest punishment for a journalist is the professional embarrassment caused by the obligation to deny yourself by publishing a personal or editorial apology,” he said.

The content of this article does not reflect the official opinions of the European Union and the Council of Europe. Responsibility for the information and views expressed in the article lies entirely with the author(s).

AJM promoted a Guide for Ethical Media Coverage of Elections