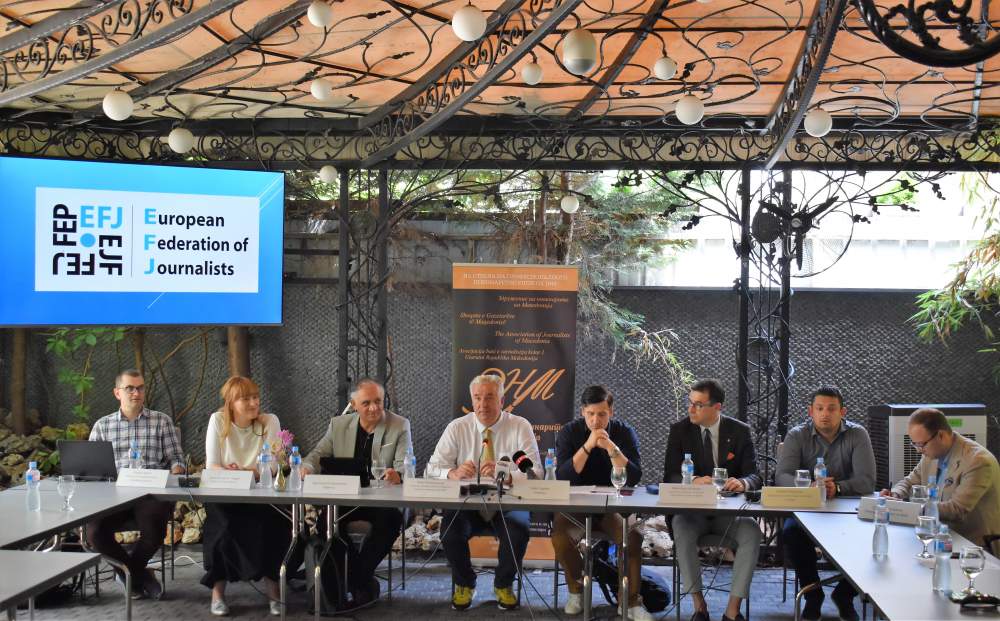 “Sports journalism is experiencing a continuous decline” – with these words, the coordinator of the sports section of journalists at AJM Pero Momirovski, started the round table to discuss the state of sports journalism in the country.

Executive director of AJM, Dragan Sekulovski, Professors Jasna Bacovska-Nedic, Ivan Anastasovski, Milorad Stojmanovski, longtime editor of sports newsroom in several Macedonian media, and journalist Vladko Arsov who shared with the audience the analysis and conclusions from the survey during May and June.

Sekulovski expressed his satisfaction with the holding of the event that will contribute to setting the goals and challenges faced by sports journalists in the country:

“AJM, as a credible and oldest journalistic organization in the country, in its four-year strategic development plan, aims to support its sections of journalists to achieve what they need. The support is primarily in the form of organizing joint events as this one is where they discuss problems and solutions and represent the interests of the sections before domestic and international organizations and institutions. Currently, there are three sections in AJM: the section for camera operators and photo reporters, the section for young journalists, and the section for sports journalists. We remain open to establishing other thematic sections at the request of AJM members.

The director of the Agency for Youth and Sports, Naumce Mojsovski, was also a guest at the round table and welcomed the initiative, emphasizing that today there is a lack of specialized programs in the media, especially programs in the field of sports.

Professor Jasna Bacovska-Nedic spoke about the situation with the interest of future students in journalism studies, mentioning the declining global trend in this field. She emphasized the openness of the Department of Journalism at the Faculty of Law to cooperate with sports journalists to improve the current situation in this field.

Professor Ivan Anastasovski agreed that this issue needs to be publicly discussed, because sports journalism enters the social category precisely because of the working conditions faced by sports journalists, i.e., it is necessary to position this branch of journalism as a separate profession.

The journalist Milorad Stojmanovski reminded the present participants and guests what the condition of the sports journalists before and now that we are facing the survival of the specialized journalists was.

In the working part, a discussion was developed by fellow sports journalists who emphasized the current situation in sports journalism and working conditions with their views and opinions.

The coordinator of the sports section at AJM, Pero Momirovski, closed the event with the following words:

“This is the first roundtable on sports journalism, titled – Sports Journalism – a warning before expulsion – in the hope that we will have a brighter title at the next meeting. This meeting is a kind of initiative for the people around us to see how far we have come. We send a series of conclusions from this round table to the competent institutions, the main content is that we should be helped because we are the ones whose interests are defended, how wide it is and secondly we will try to reach a fund of benefit, financial support so that in the future we can most honestly help individuals or the specialized media, but that is something that would be realized if there is hearing from the other side. “

AJM: Politicians should not disparage journalists in their public speeches