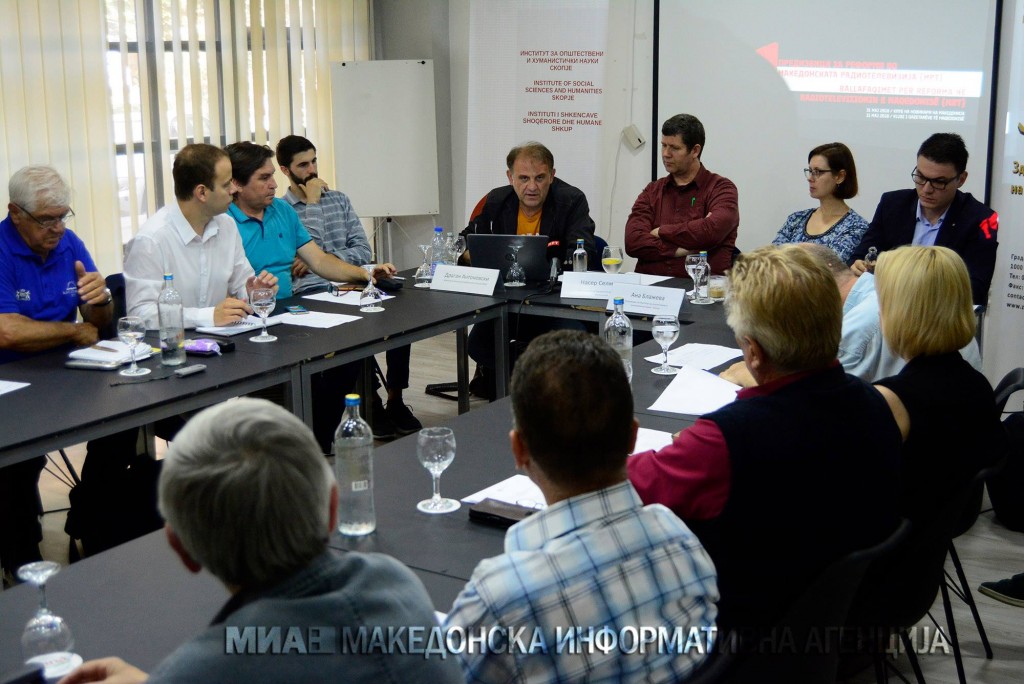 There is no real reform in the Macedonian media sphere without a serious reform of the Macedonian Radio Television. The departization of the governing bodies and the provision of a sustainable system of financing the public service are key to strengthening its independence and professionalism. These were some of the conclusions of today’s debate on “Challenges for Reforms in the Macedonian Radio Television” organized in Skopje by the Association of Journalists of Macedonia in cooperation with the Institute for Social Sciences and Humanities.

The president of AJM Naser Selmani said that the government and the opposition are working together against the implementation of the European Commission’s recommendations on public service reform. “The government is attacking the financial independence of MRT, and the opposition is trying to keep its party soldiers,” Selmani said, adding that the change in the model of MRT funding, which was supposed to be a temporary solution, halved the public service budget.

Selmani believes that the government with the negative assessment for the work of MRT has violated its autonomy because the public service is still being treated as a public company.

He claims that it is not government’s job to deal with the renewal of MRT’s music production, because otherwise it risks to interfere into its funding system. In addition, this interference confirmed that 0.7 per cent of the state budget is not sufficient for the public service to fulfill its mission, which is to inform, educate and entertain citizens.

Selmani said that blocking of the amendments to the Law on audio and audiovisual media from the opposition is pointless, because she has a decisive role in the selection of the new composition of the Programming Council. He said that VMRO-DPMNE is more concerned about protecting the director of MRT than providing stable public service funding. “They submitted about 70 amendments to the law, and none of them predicts an increase of funds for MRT,” Selmani added.

He urged the government and the opposition to jointly vote the Law for Audio and Audiovusual Media Services.

Ana Blazheva from the Institute of Social Sciences and Humanities spoke about the need for MRT to adopt self-regulatory acts that can strengthen its program independence.

The Director of MIA Dragan Antonovski, said that money is needed for MRT reform, but the solution should not be solely demanded by the government, but also by the will of the employees.

“The first and basic thing that must be done is departization, and the second is investing in it. But here it’s not only the state, but primarily the employees and those who will be employed,” Antonovski said. According to him, the solution for MRT should not be awaited from outside, but instead it should be sought from within.

The journalist Igor Stojanov presented the results of the analysis on the socio-economic situation of the journalists from Eastern Macedonia, according to which, for that entire region, MRT has only three correspondents. Stojanov said that the quality of information in the public service needs a developed correspondent network and correspondence centers in all cities.