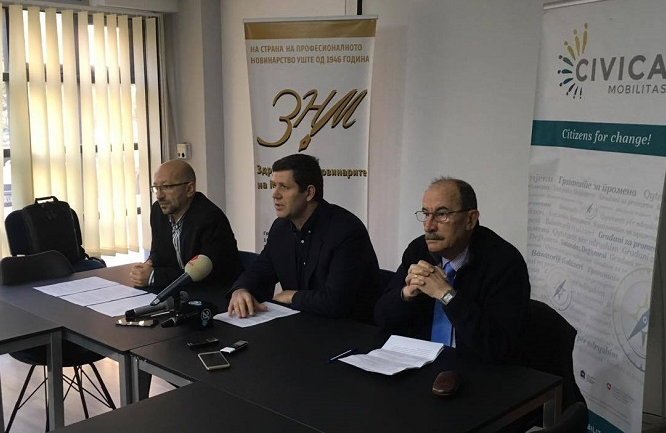 Today, the Association of Journalists of Macedonia presented two publications that analyze the situation of the online media in the country. The author of these analyzes is the experienced journalist and digital media consultant, Mr.  Zoran Ricliev.

The President of AJM, Naser Selmani, the President of the Appeal Commission at the Council for Ethics in the Media of Macedonia, Mirche Adamchevski, and the author Zoran Richiliev spoke at the press conference aimed at promoting the analyzes.

The President of AJM, Naser Selmani, said that the requirement for the regulation of online media is not in line with the Council of Europe’s recommendation for freedom of the internet adopted in 2016. Selmani said “Macedonia as a member of the Council of Europe has the obligation to respect, protect and promote human rights and fundamental freedoms on the Internet,”

The author of the analysis Ricliev explained that the public has created a wrong perception that online media are out of the law. “All laws that relate to the responsibility of traditional media also apply to online media. Online media should not use hate speech, libel, do not respect the right to privacy or steal texts because they bair same responsibility as traditional media, which is in accordance with the criminal code, defamation law, privacy law or copyright law “Said Ricliev.

According to him, a practice is required in which the media will guarantee their integrity with a transparent identity, by publishing the ownership of the media and publishing the impression that will show the editorial structure, and the journalists to sign the texts.

Adamchevski said that the Ethics Council has adopted a new Rulebook on membership of online media. “To have an impression, to agree that they will support self-regulation/will respect the Codex of Journalists and the Charter of Ethics and place a banner on their site. The published texts should be signed by the author, the portals should regularly publish content of public interest, have registered mk – domain, to publish the decisions of the SEMM, and when using content from other media to indicate the source.”

You can view the two published analyzes on the following links:

AJM condemns the detention of journalists by the police