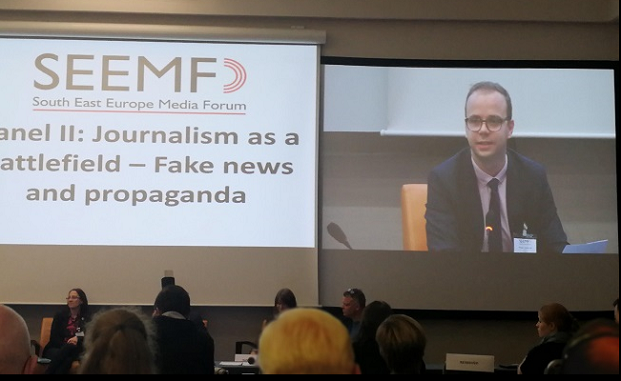 Today in Sofia, Bulgaria a conference is held dedicated to the challenges of the media in Southeast Europe, organized by the South East Europe Media Forum. The conference is attended by about 300 media representatives, media experts, representatives of the academic community and local and international media organizations.

The director of AJM, Dragan Sekulovski, participated at the panel discussion dedicated to fake news, and he stressed that the region needs media, which will be an example in the fight against fake news. “The public broadcasting service, or in our case, MRT, has an important role in this context, and it should serve as an example of how other media should report,” Sekulovski said.

He believes that one of the mechanisms of a long-running battle against fake news is raising the awareness and educating citizens in order to identify the fake news. “It is true that most often the fake news are being spread through online media, but it is wrong to think that such media content can be regulated by law. Excessive regulation can cause self-censorship and negatively affect the freedom of speech,” Sekulovski said.

According to him, fake news in Macedonia in the past period were created by quasi experts, fake organizations, fake polls, fake protests aiming to create a distorted picture of the reality in society and to defocus from the real problems.