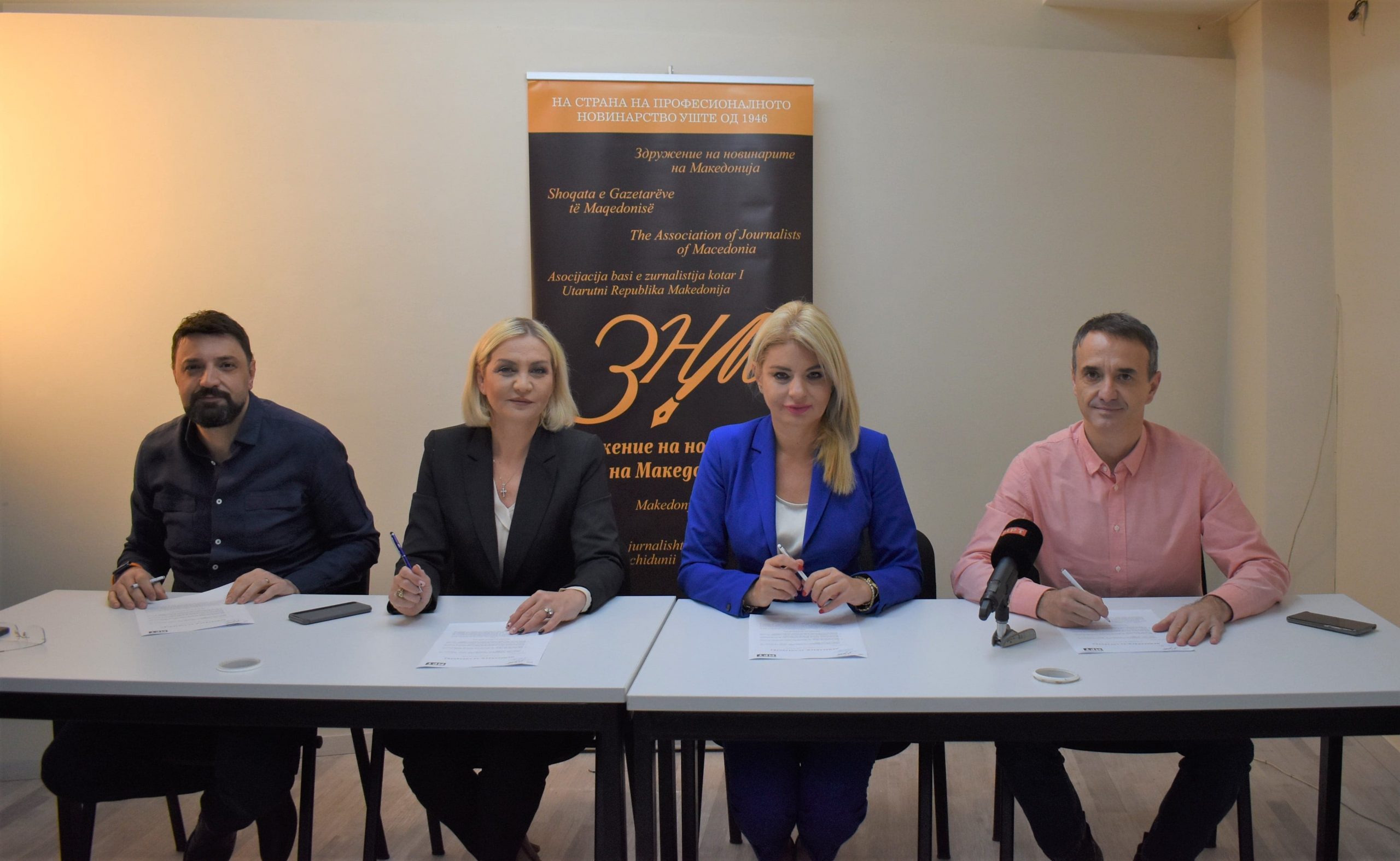 The Association of Journalists of Macedonia (AJM) and the Macedonian Radio Television (MRT) signed a Memorandum of Cooperation which represents a mutual agreement for the realization of joint activities within the framework of the annual work plans according to the strategic goals.

AJM and MRT, after completing the joint training for journalists and media workers, which took place in September, determined that there is room for cooperation in the direction of improving the capacities of journalists in the public service, their networking, and strengthening of cooperation.

Mladen Chadikovski, the president of AJM said: “I welcome the future cooperation between AJM and the program services of television and radio. What is significant is that with this memorandum we undertake in the period ahead of us and the next few years to carry out constant training for professionalization and constant upgrading of the standards in the work of the employees of Macedonian television as a prerequisite to constantly raising the quality of the contents, but and building the capacities of MRT. With this memorandum, we undertake to hold this training four times a year, which is really significant, not only in raising the standards of the journalistic profession but also in raising the spirit of teamwork within the editorial offices. “

Aneta Andonova, editor-in-chief of the first program service of MRT said: “The signing of this memorandum is correlated with the role and mission of the public service, which is to support every form of audiovisual media creation while offering reliability, quality, and transparency in its contents. In that context, the cooperation between the public service and ZNM, which has been surrounded by such a publication for many years, will allow us to deepen the cooperation that will help us to strengthen our capacities and work together to increase our professional capacities.”

Regarding the signing of the memorandum, the responsible editor of the second program service of MRT, Migena Gorenza, said: “I hope that such training will help especially young journalists to understand what it means to be a journalist in the public service, which should continue to have the primacy… That is why the cooperation indicated by this memorandum with the Association of Journalists of Macedonia is extremely important in order to put the experience into practice on both sides so that we can continue to do what we have been doing for years, which is to be the best at the ether.”

Eran Hasipi, the responsible editor of the fourth program service: “I would like to emphasize here that as a public service that invests in the technology for the realization of our shows, it is necessary to invest in professional and human resources because we as a public service have vast experience in the journalistic profession. So, as much as this cooperation will contribute to fellow journalists in MRT, it will be significant for journalists in private media as well, because public service is really the history of this country and the media sector. I would like to emphasize that this is the first time as the editor of MRT 4 that I am attending such a meeting. We, like other ethnic communities that broadcast a program in another language, in this case, a Turkish program that has been broadcast for over 60 years on Macedonian television, will have great significance for us as editors in the Turkish, Serbian, Vlach and Bosnian languages, as well as signing this memorandum. that this coin is really important to get closer to our colleagues in television and to function together. The experience should be turned into an advantage that will contribute to the creation of a much higher quality program in MRT, but also in other televisions in our country”

The memorandum of cooperation was signed by Mladen Chadikovski as president of ZNM on the one hand, Aneta Andonova, Migena Gorenza, and Eran Hasipi on the other hand as responsible editors of the first, second and fourth program service of the Macedonian Radio Television.