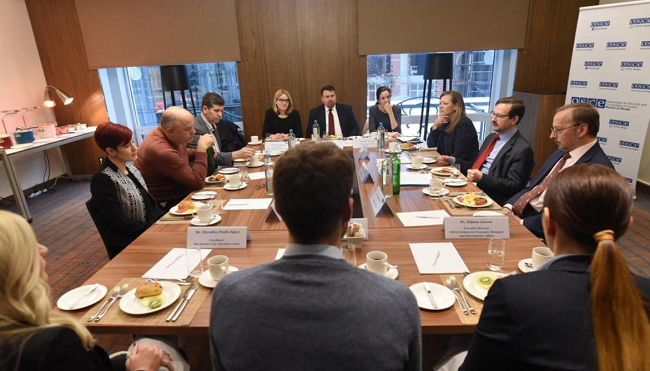 President of the Association of Journalists of Macedonia Naser Selmani, together with representatives of five other civil society organizations, met with OSCE Secretary General Thomas Greminger, who is on a two-day visit in Macedonia.

Ambassador Greminger informed the representatives of the civil society organizations about the purpose of his visit, which is to see how the country has overcome the political crisis and get acquainted with the Government’s reform agenda, and the OSCE is interested in supporting these efforts.

At the meeting, the President of AJM, Naser Selmani spoke about the safety of journalists and the process of amending the media laws. “There is a clear tendency in Macedonia for impunity for the violence against journalists because not even one attacker has been brought to justice,” said Selmani. He expressed disappointment that two weeks ago the police arrested two journalists for allegedly filming the judges on the release of the verdicts of the case “Divo Naselje” and in fact they were questioning them for recording the police in front of the court building. “It’s an absolutely unacceptable practice,” Selmani said, adding that police still treats journalists as dangerous people who should not be trusted. He committed to build an institutional mechanism for prevention and punishment of the violence against journalists, for which AJM is ready to cooperate with the institutions.

Regarding the changes in media laws, Selmani said that the debate instead to improve the text of the law, on the contrary, it is making it worse. For the AJM it is absolutely unacceptable that the government wants to regulate media content. “It is contrary to the best practices in European democracies,” stressed Selmani. He said the imposition of fines for the journalists reporting shows that the Government wants to play the role of editor-in-chief of the media. According to him, the Government so far has not shown a desire for real debate with arguments about the financing model of the Macedonian Radio Television. If the government knows in advance that only 0.7 percent of the state budget should be allocated for MRTV, then what is the point of having a debate for this law, said Selmani.

AJM condemns the detention of journalists by the police

Selmani warned, the Government wants to put censorship in the media