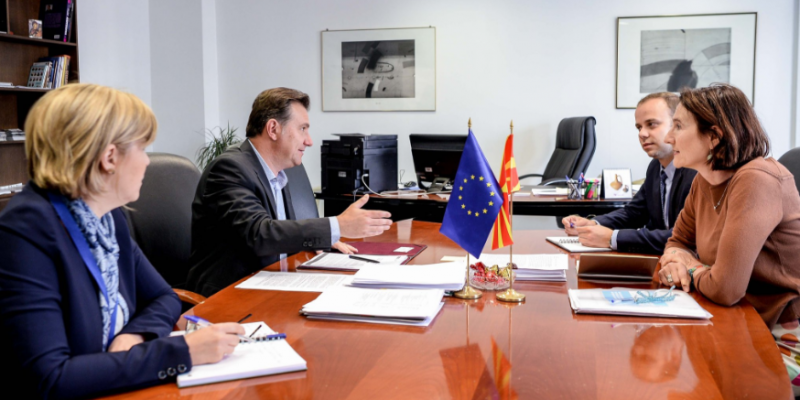 On 9 May, Renate Schroeder, EFJ Director together with Dragan Sekulovski, Director of the AJM met with Robert Popovski, Minister for Communication, Transparency and Accountability within the Government of the Republic of Macedonia. The EFJ congratulated the Minister for its new policy and improved cooperation with the journalist’ community and in particular the AJM.

“The cabinet of the Minister without Portfolio in the Government of the Republic of Macedonia in charge of Communications, Accountability, and Transparency is new and shall reflect our goal to be open, transparent and democratic. Media freedom and journalists’ freedom are top priorities of our government,” said Minister Robert Popovski. That is why we are organizing weekly meetings with the press, lead a zero tolerance policy vis-a-vis attacks against journalists and pursue a media reform.”

Such media reform includes improvements on the Law on free access to public information, defamation, reform of the public service media MRT, which needs improved funding and editorial independence.

“We want real professionals to work who are independent of political pressure, but we need the opposition to agree to our proposals”, he said and acknowledged the difficult heritage of control of the media by the former government.

Minister Popovski reckoned the problem and assured he would get them labeled. “Media has not enough money to send journalist to press conferences or government events. We want to help media”.

EFJ and AJM also met with Oliver Spasovski, Minister for Internal Affairs and Dejan Andonov, Deputy Minister for Professional Standards and Internal Control within the Government of Republic of Macedonia. The Minister also emphasised the new government approach towards journalists and no to impunity and zero tolerance.

He outlined three projects including:

Oliver Spasovski admitted that a great atmosphere of self-censorship and fear continues in Macedonia’s small media market, and said that an interdisciplinary and inter-institutional approach is needed to slowly change the culture of impunity.

The EFJ reminded the Minister to fully implement the Council of Europe Recommendation (2016) 4 on the Protection of Journalism and Safety of Journalist and other Media Actors.

The AJM latest report on “Indicators for the degree of media freedom and journalist’ safety” (December 2017) highlights the many challenges journalists face in Macedonia also with regard to disgraceful working conditions, lack of editorial independence and ethical challenges.

Following this short mission, EFJ, AJM and SSNM went to Struga (Macedonia) to participate in the OSCE South East Europe Media Conference. Renate Schroeder moderated the first session on safety of journalists. All participants of the conference adopted a declaration on the shooting of journalist Olivera Lakić.

Photo Credit: Government of the Republic of Macedonia

Reform of the MRT with more money and less political influence