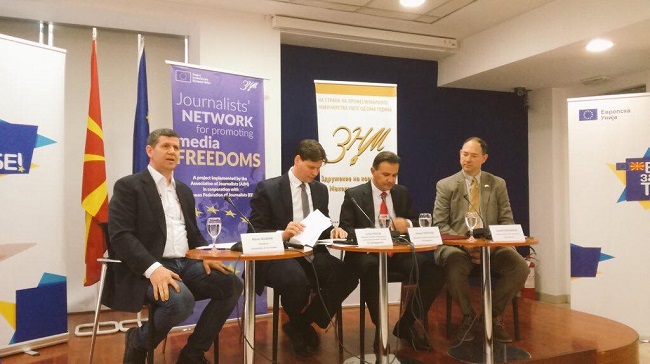 The Association of Journalists of Macedonia in cooperation with representatives of the Government as well as with partners from the European Union and the Embassy of the USA yesterday organized an event which marked the International day of press freedom. On the event spoke the president of AJM, Naser Selmani, the Minister of Transparency and Accountability Robert Popovski, Lukash Holub, the head of the Political Affairs, Information and Communications Department at the Delegation of the European Union and David Stephenson, head of the political-economic office in the USA Embassy in Skopje.

In his speech, the President of AJM expressed solidarity with fellow journalists from Europe, Daphne Caruana Galizia and Jan Kuciak, who lost their lives carrying out their journalistic duties. “The professions such as journalism are very rare, where the price for a well finished job is paid by your own life,” Selmani said.

According to him, journalists are attacked, censored and punished in order to be silenced and the truth to be hidden from the public. “Today we should stand firmly in defense of independent media if we want to protect ourselves from every kind of propaganda and abuse,” he said.

The head of the Political Affairs, Information and Communications Department at the Delegation of the European Union, Lukash Holub, said that in European societies, the media provide an irreplaceable form of exchange of different opinions and attitudes, and that journalists have an incredibly important role to play in this. “These are not easy times and they require serious and continuous dedication and attention. In this process, the government, the media, the civil society and the private sector need to reflect European values in their everyday work and life,” he said.

“Political parties should immediately react with their members if they threaten journalists. There should be zero tolerance for attacks on journalists. Proper reporting and press freedom are very important issues for the EU. But journalists should report correctly and without bias,” said the EU representative.

US Embassy official David Stephenson said that the theme of the International Press Freedom Day this year is the control of power. He said transparency provided by the media is very important for the responsibility of the government and the rule of law in the country. Stephenson praised the AJM in promoting the freedom of speech. “I would like to thank the Association of Journalists of Macedonia for its work, especially for keeping the register of attacks on journalists, which we often use in preparing various reports,” he stressed.

“We need to work together on media freedom standards which should be applied and followed by every government in future. So far, we as a government did many things, but there is still a lot of work ahead of us,” said the Minister of Transparency and Accountability Robert Popovski. He added that this government will have zero tolerance for threats and attacks on media workers.

This event was organized within the project “Journalists’ network for media freedom in Macedonia” which is financed by the European Union.