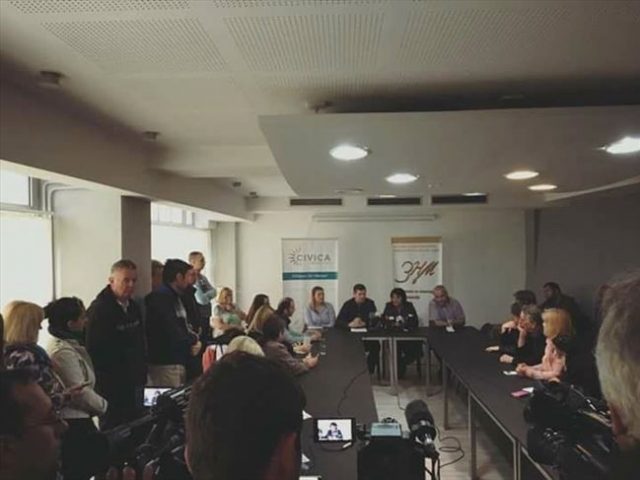 Association of Journalists of Macedonia, the Independent Union of Journalists and Media Workers and trade union representatives of the 120 laid-off journalists from the closed newspapers of MPM: Utrinski Vesnik, Vest and Tea Moderna on Monday publicly called on the Public Prosecutor’s Office, the Public Revenue Office, the Labor Inspection and financial police to enter the company Media Print Macedonia and check its overall performance because there are reasonable doubts that the company was pushed into fraudulent bankruptcy and has  indications of money laundering.

The journalist and trade union employee representative from Utrinski Vesnik, Ljubisa Stankovic asked to open a preliminary investigation to examine how it was possible at a time when the company cut the salaries of journalists, MPM to pay to Director Jana Stanisavljeva salary of 25 thousand euros. “We suspect and the state prosecutor should examine whether the MPM has pumped huge amounts of money,” said Stankovic.

He also asked the prosecutor to investigate the origin of 1.3 million euro of the Director Stanisavleva that made her partner in the company, especially because before that she worked in the state administration. According to him the prosecution should check if someone is pushing MPM towards bankruptcy in order to get rid of the employees.

“The company that is in such a bad financial condition is also a donator in a political party. That is why the Macedonia’s Special Prosecution SJO has opened a procedure for half a million euro” said Stankovic.

Ana Antevska, journalist from the newspaper Vest, said that the journalists got informed from the human resources department one day before the last number of the newspaper was prepared that they are fired. “MPM owns us the salaries for March and April and for eight days over 120 people have been left without medical insurance. As long as the procedure for declaring redundancy lasts, we have the right to be paid, but the company informed us that we should be happy if they pay us the march salary”, said Antevska.

The President of AJM, Naser Selmani expressed his solidarity and support for the colleagues from MPM in realization of their rights. “We condemn the behavior of the management and owners of MPM, which not only failed to save the company, but is trying to avoid legal obligations to compensate the laid-off journalists”, said Selmani.

He said that the destroying of MPM is a great example about how the political interests are destroying the media. “Only free and professional media have bright future in Macedonia. All the rest are judged to fail”, explained Selmani.

Independent Union of Journalists and Media workers are preparing criminal charges against an unknown perpetrator for the case of MPM, so that the practice of deliberately destroying brands and media stops. “We are in the process of filing criminal charges for signing damaging contracts, abuse of position, which deliberately took the company in financial difficulties, they cut the salaries of journalists and finally came to the closure of newspapers, and people lost their jobs”, said Tamara Chaushidis, president of SSNM.