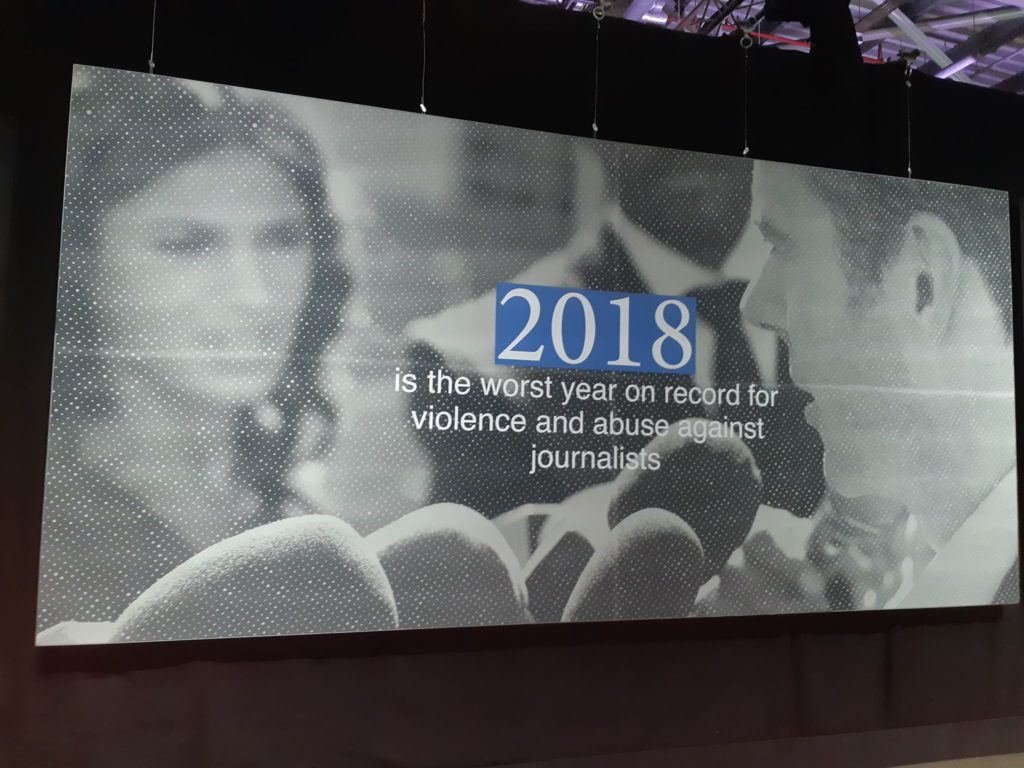 Journalists’ security is crucial to the existence of independent and professional media, as well as the exercise of the right to freedom of expression. Without the freedom of the media and quality information for the public interest, the functioning of the democratic processes in the country is not possible. Violence, harassment, and intimidation directed at journalists are attack on democracy. They have the effect of suppressing media freedom and freedom of expression.

In the latest European Commission Report on the Republic of North Macedonia published on May 29, it is stated, “the country is moderately prepared in the area of ​​freedom of expression and has made good progress in the last year.”

According to the Report, the climate for freedom of the media and freedom of expression continued to improve. However, it is essential public officials and political elites to demonstrate a higher level of tolerance towards criticism, thus supporting freedom of expression. The European Commission sent a message that the state should pay particular attention to the rapid and effective monitoring of all cases of physical and verbal violence against journalists by the police and judicial authorities.

As a separate paragraph in the Report, the last five cases of journalists’ intimidation in 2018 and 2019 were mentioned.

“However, there were two incidents alleged by senior government officials against the media. Politicians and public officials still need to show a higher degree of tolerance to criticism and to advance freedom of expression. The procedures for police conduct towards journalists and the registration of attacks should be improved. Law enforcement authorities and the Public Prosecutor’s Office should effectively monitor all incidents against journalists. The old cases of the most serious physical attacks on journalists (13) have not been resolved due to unprofessional behavior in the investigations”, the report of the media freedom report says.

In the Report, the Commission emphasizes the cooperation between the Ministry of the Interior and the Association of Journalists aimed at determining responsibility for incidents of physical and verbal abuse or threats against journalists.

The situation with the media freedom in 2018 and 2019 in the Republic of North Macedonia has been slightly improved, but serious systemic reforms that will create a favorable environment for smooth development of the media and development of professional journalism are lacking.

This year the country has a leap of 14 places in the ranking of the Reporters Without Borders organization for freedom of the press. It is now at 95th place. However, despite the big leap, North Macedonia is among the last countries in the region. Only Montenegro (104th place) and Bulgaria (111th place) are behind. A few places ahead of North Macedonia is Serbia, which is at the 90th place, Albania is ranked 82nd in the ranking, Kosovo is 75th, Greece at 65th, Croatia at 64th, and Bosnia and Herzegovina ranked 63rd place.

The rating of this organization says:

“High representatives of the Government repeatedly insult journalists in North Macedonia. Violent attacks on media workers have become less common, but the long-standing culture of impunity is further felt: only small parts of the attacks that have taken place in recent years have been investigated and the perpetrators identified. “

The Republic of North Macedonia remains in the group of partially free countries according to the annual report, “Freedom House” entitled “Freedom in the World 2019”. This year the country will remain with a total rating of 3.5, on a scale where 1 is the most free, and 7 is the least free society.

In the region, North Macedonia is located behind Slovenia, Greece, Croatia, and Bulgaria, and slightly behind Serbia, Montenegro, and Albania, and is better than Kosovo and Bosnia and Herzegovina.

Memorandum of cooperation with the Ministry of Interior and the OSCE

The process of improving the cooperation between the Association of Journalists of Macedonia and the Ministry of the Interior began with the signing of the Memorandum of Cooperation on September 29, 2017. The aim of the Memorandum was to demonstrate the political will of the Minister of Interior to institutionalize the problems of journalists and the readiness to end the policy of impunity for violence against journalists.

Interior Minister Oliver Spasovski pledged that the Ministry of Interior will do everything for the media workers to be able to do their job freely and safely.

The memorandum provides preparing the reporting protocol for high-risk events that will enable reporters to monitor events without having their security jeopardized.

On March 28, 2018, a Memorandum of Cooperation was signed and between the OSCE Mission to Skopje and the AJM with aim to improve the safety of journalists and media workers, but also to improve the quality of their reporting.

One of the activities that emerged from the Memorandum of Cooperation was a series of workshops dedicated to the security of journalists when reporting from high-risk events, organized by the OSCE Mission in the country. The purpose of the workshops was to train police members on the importance of the role of the media in a democratic society that cannot function without free and professional media.

Last year, six training sessions were held for journalists and police officers in six cities at which was debated for increasing mutual trust and cooperation in order to find solutions that would enable both parties to fulfill their tasks smoothly and professionally.

Interior Minister Oliver Spasovski, at one of the trainings, called on other institutions such as the judiciary and the public prosecutor’s office to contribute their work to increasing the security of journalists and freedom of speech.

Upon completion of the training, “Safety Report for Journalists During High-Risk Events” was prepared to serve to identify the risks and to avoid the attacks and pressures faced by journalists, especially when reporting from high-risk events. Furthermore, the Manual serves to clarify the procedures and legal responsibilities of the Ministry of Interior and the Public Prosecutor’s Office in order to provide greater protection for journalists. In addition, the Manual offers practices and experiences of AJM and other international civil and political organizations from the prevention of attacks and pressures on journalists.

However, according to the latest annual report of the AJM for the indicators on the level of media freedom and security of journalists published on December 25, 2018, the journalists’ security last year noted some improvement, but the policy of impunity for the attackers of journalists is still present.

The number of attacks has been reduced by three times, and the first court verdicts have been passed against those who attacked journalists in the past. However, the policy of impunity in North Macedonia has deep roots. Of the 59 attacks, only two have been resolved so far.

The main reason for this is judicial practice in punishing attacks on journalists that is not consistent with the protection of information as a matter of public interest and a key component of a democratic society. Courts do not recognize journalists’ attacks as a special social danger, so cases are not resolved within a reasonable time, nor adequate.

Last year, the police officers with higher ranks in the hierarchy of the Ministry of Interior, i.e. commanders and chiefs attended the training.

This year, again, six workshops were held between journalists and police officers, but this time they were inspectors, police officers of general jurisdiction, and members of the Sector for Inspection and Traffic Accidents.

From May 13 to June 12, a series of workshops were organized in six cities around the country in cooperation between the Association of Journalists of Macedonia and the OSCE Mission in order to improve the safety of journalists. Workshops were held in Strumica (May 13), Ohrid (May 16), Shtip (May 23), Bitola (May 27), Kumanovo (June 10) and Tetovo (June 12) with journalists and police officers, and spokespersons the local Sectors of the Ministry of Internal Affairs.

The manner of reporting and acting of journalists and police officers in case of violent protests, traffic accidents, football matches, court reporting, during the preparation of a research story, pride parade was analyzed.

The various screening scenarios that have been analyzed have shown that neither journalists nor police officers in certain situations know enough own responsibilities  and competencies. Problems arise because there are no documents or protocols on the manner in which the police acts during the media coverage of certain events. On the other hand, there are situations when journalists violate ethical standards and report contrary to legal regulations.

When analyzing the scenario with violent protests in front of the Parliament, some of the younger police officers said that police could use force on a journalist or camera operator if they did not obey the order issued by the state leadership to stop reporting.

When analyzing the traffic accident that witnesses were journalists, it was discussed whether journalists had the right to record the accident and how to report them professionally. Police officers had remarks to reporters that they sometimes hindered the investigation, and journalists reacted that the police were limiting them to do their utmost to do their job.

We pay special attention to the need for systematic work with aim fully meeting the international standards regarding freedom of information. Promoting only on certain segments cannot produce good results without reforming the complete legal framework and practice in this area.

Journalists will not be safe as long as the institutions do not fully investigate the final attack on journalists and the responsible ones are not brought to justice.

This text was prepared as a result of implementation of the joint training activities supported by the Embassy of the Kingdom of the Netherlands in Skopje and the OSCE Mission to Skopje. The content of this article is the sole responsibility of the AJM and its authors and can in no circumstances be regarded as reflecting the position of the two international partner organizations.