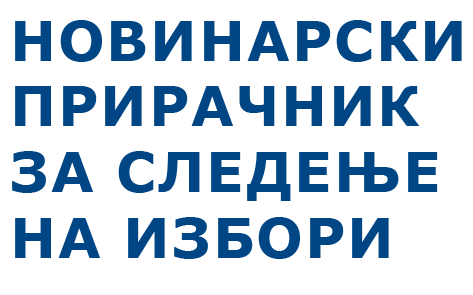 Association of Journalists of Macedonia in cooperation with the Office of Fondation Conrad Adenhauer in Skopje prepared a Journalist handbook for monitoring elections, which should help journalists in a professional manner to report on the campaign for the early parliamentary elections held on December 11th in Macedonia.

The first part of the guide briefly explains the role of the media in democratic countries, and has practical advice for journalists to report on irregularities and to alert reporters when covering elections in “young democracies”.

The Handbook covers the basic standards of journalism applied in Macedonia and the world, in order to remind reporters of the obligation to report accurate, impartial and balanced for the participants in the election campaign. Special attention is paid to the reporting of the public broadcaster, which as a service to citizens has special responsibility for media coverage.

Professional reporting of journalists for the campaign is one of the key prerequisites for the organization of free and credible elections. Without quality and timely information, citizens can’t independently make responsible decisions on election day.

Besides the professional principles contained in the Code of Journalists of Macedonia and in the Code of the International Federation of Journalists, the Manual contains the legal obligations of the media referred to recent amendments to the Electoral Code, agreed between the signatories of the “Przino” agreement.

In a separate part the obligation of the Media Agency to monitor the way the media report one hundred days before the election is contained, which briefly explains the conditions under which the media and journalists can be punished if they report unobjectively, biased and unbalanced for participants in the elections.

AJM agrees with EU assessments of the media

AJM rewarded the best photographs from the refugee crisis