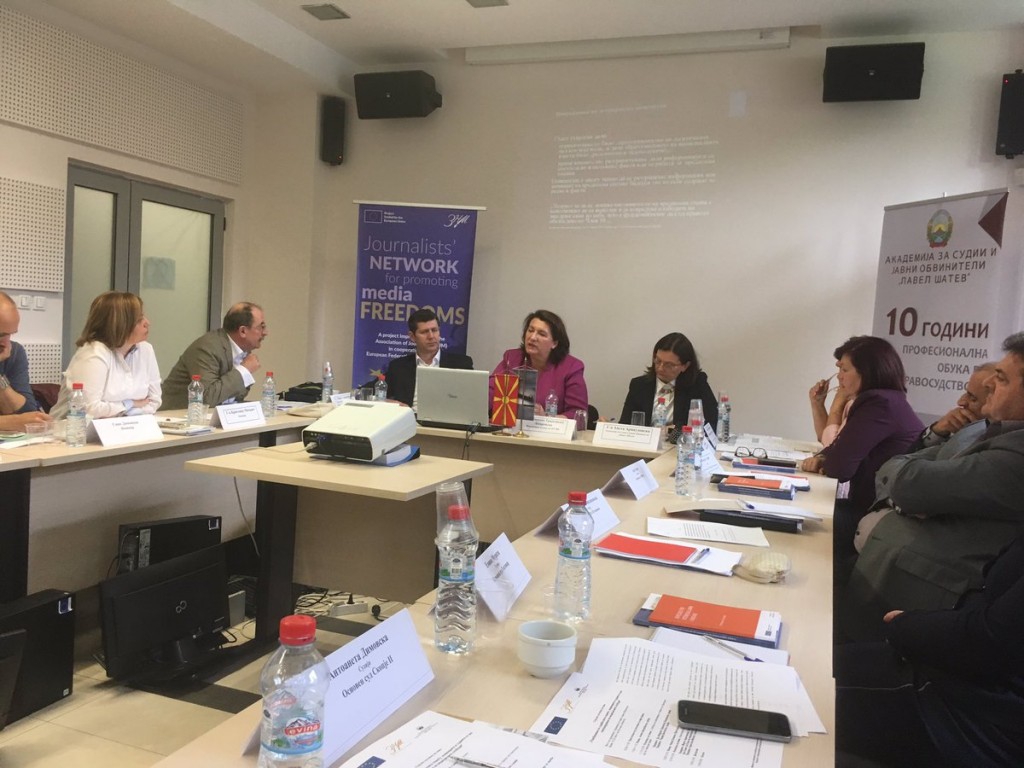 Association of Journalists of Macedonia in cooperation with the Academy of Judges and Public Prosecutors “Pavel Shatev” on Thursday held an expert meeting on topic: “Enhancing cooperation between journalists and judges in order to promote media freedom.” The meeting was attended by experienced journalists who follow the judiciary, judges, lawyers and representatives from the Council of Media Ethics of Macedonia.

The purpose of the meeting was to strengthen cooperation between journalists and judges, which will contribute to improve judicial practice and the reporting of journalists from the courts.

Director of the Academy for Training of Judges and Prosecutors, Aneta Arnaudovska, in the opening speech said that the judiciary faces a flurry of global change, which require modernization of the judiciary and open doors to the public. “The judges had to open the courts to the media and civil society in terms of what it means service-oriented judiciary,” said Arnaudovska.

According to her, the parties know their rights and obligations and therefore requires a modern way of communication with the audience. “Judges and journalists should respect their professions and to overcome their differences. Both professions have to hold on to their code of ethics, “said Arnaudovska.

The President of AJM, Naser Selmani in his speech pointed out that the good cooperation between journalists and judges is in the interests of democracy, good governance which contributes towards the welfare of the citizens. He believes that journalists and judges need each other and can be allies in dealing with the pressures of the various centers of power.

“Good cooperation with journalists for the judges means good communication with the public, which can be a major supporter of the independence of the judiciary. Also, judges can be great allies of the reporters when certain power centers use court procedures to silence them, “said Selmani.

According to him, when journalists are exposed to threats and pressures, not only their individual rights and freedoms are endangered , but also the right of the citizens to be informed. “The consequence of threatened journalists is bad informed citizens, who as such can be an easy target for manipulation. Unfortunately they normally make bad political decisions, which then negatively affects the quality of our life as a community, “he added.

Selmani pointed out that the journalists and judges are facing with common challenges, loss of credibility and independence. He believes that self-regulation in the media not only increases the accountability of journalists in public, but also makes distinguish between professional journalists and those who don’t respect the ethics of journalism. “We showed that we are not all the same. Not all of us are irresponsible, unprofessional and corrupt as politics wants to represent all journalists “, stressed Selmani.

Dr. Mirjana Trajkovska Lazarevska ex judge at the European Court of Human Rights, said that Article 10 of the European Convention on Human Rights does not guarantee freedom of speech only for journalists, but for all citizens, including artists, lawyers, judges, politicians. “The state should not interfere in the freedom of expression also for the non-governmental organizations and the media.” said Lazarevska.

She noted that public figures are always exposed to more criticism from the public and therefore their tolerance must be greater. According to her, the judiciary must modernize and improve the way of communication with the media and stressed that judges must have a better relationship with the public and increase transparency. – “The practice of the European Court of Human Rights requires judgments, events attended by judges and all major developments immediately to be published on the official website of the court, and it helps journalists to have timely insight into the entire work of the court. We also need to organize round-tables with NGOs and journalists because from those discussions we always get good and high quality solutions. ” concluded Lazarevska.

Addressing the meeting had Dimchevska Lidija, a judge at the Court of Appeal in Skopje, in her speech stressed that journalists should be careful because the news often can hurt people. “Even when journalists transmit news from the bulletin from the MOI should stick to the professionalism when they transfer information, because in the bulletins sometimes mistakes happen.” said Dimchevska.

Journalist Christina Mackic in her presentation talked about the mistakes that most journalists make when reporting from court proceedings, such as violation of the presumption of innocence and not checking the information to the end. Mackic stressed that the courts are more and more closed to reporters and therefore offered several solutions to overcome this situation: consulting experts, discussions with editors, regular briefings and joint training for judges and journalists.

The President of Complaints Commission of the Council of Ethics for the media in Macedonia Mirce Adamcevski, pledged to improve communication between judges and SEEM.

In the debate participants agreed that these meetings should become a regular practice, while journalists called to stop the practice of impunity for attacks on journalists and application of the ECHR practice when courts act of defamation lawsuits against journalists.

Public call for award for professional reporting on refugees