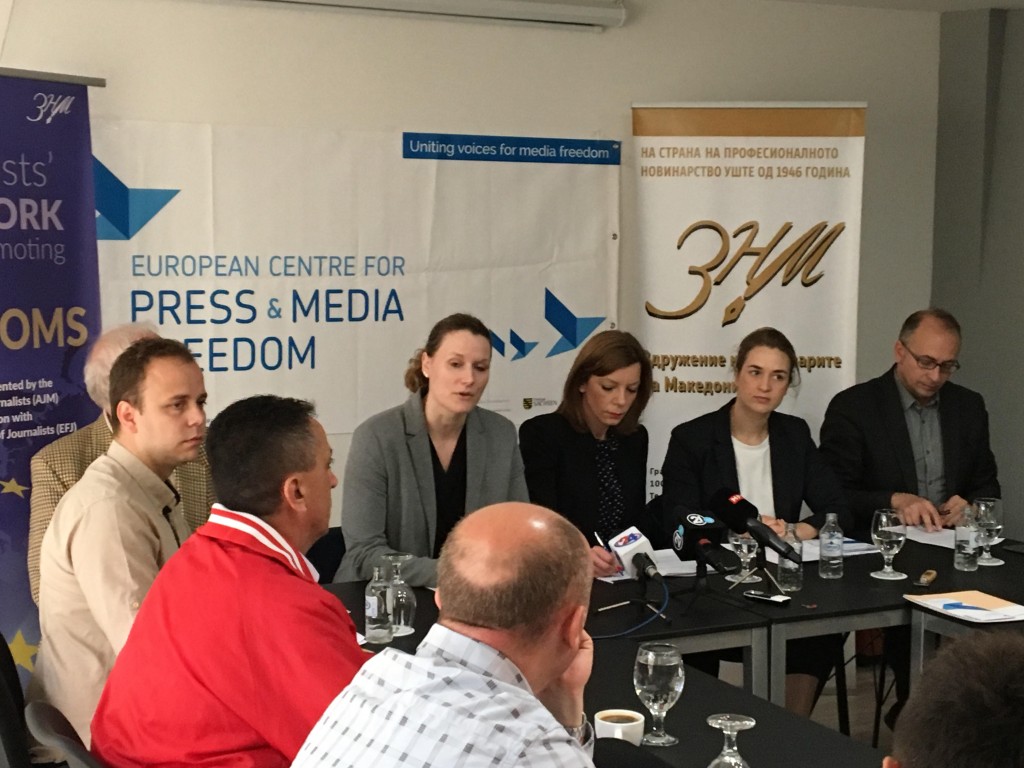 We hereby express our deep concerns about the yesterday‘s violent attacks against journalists in the parliament of the Republic of Macedonia.

From the beginning of 2016 until yesterday at least 21 attacks against journalists in Macedonia have been registered by the Association of Journalists of Macedonia (ZNM), out of a total of several dozens within the last years. All this clearly demonstrates a rising trend in violence against journalists.

The state of media freedom in the country is very worrying. Attacks on journalists are a direct threat to democracy.

On invitation of ZNM and the Western Balkan´s Regional Platform for Advocating Media Freedom and Journalists Safety the European Centre for Press and Media Freedom (ECPMF) conducted a fact-finding mission to Skopje from 25 to 28 April 2017. The delegation, including the European Federation of Journalists (EFJ), South East Europe Media Organisation (SEEMO) and Osservatorio Balcani e Caucaso Transeuropa (OBCT) examined

the increased violence against journalists in Macedonia and listened to their experiences.

During the mission the international delegation so far conducted a total of 13 interviews with 15 representatives of several media outlets, NGO´s, the Agency for Audio and Audiovisual Media Services and the Media Ethics Council. Additionally the delegation met the Minister of the Interior, Mr Agim Nuhiu.

According to our findings among the main reasons for the increased violence are the following:

The signees of this statement condemn any aggression on journalists in Macedonia.

We want to strongly urge the political parties and all related bodies and authorities to prevent further attacks and ensure a safe environment for journalism and freedom of expression. We call on the judiciary and all responsible authorities to stop the ongoing impunity.

We also call on all journalists to take their role as watchdogs seriously. We encourage them to report and file complains if they are attacked, intimidated or harassed. They should stand in solidarity with their colleagues, cooperate and support each other.

We, as European media freedom and journalists organisations within the freedom of expression community, stand with our colleagues in Macedonia. We will further observe their situation and raise our voices to support them. There will be a full report on the fact-finding mission in May.