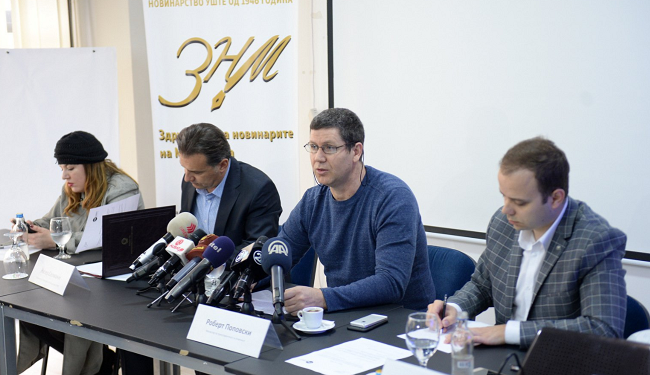 The Association of Journalists of Macedonia in cooperation with OnLimit Media organized a debate on the topic: “Challenges the Government and state institutions face with their transparency before media and citizens”. Speakers on the debate were, the Minister of Transparency and Accountability Robert Popovski, President of AJM Naser Selmani, and the investigative journalist Sashka Cvetkovska.

In his address Mr. Selmani welcomed the declarative commitment of the new Government to become more transparent, and that they have taken concrete measures that enables journalists to receive more information of public interest than previously. He stressed that violating the right of journalists to free access to information is a violation of freedom of expression. “As long as there is no political responsibility, as well as sanctions for these officials who do not provide the information requested by journalists, one cannot say that we are a serious democratic society,” Selmani said.

The Minister Popovski said that the Government is fully committed to increase the degree of transparency and accountability. “Transparency and openness before the public eye is an integral part of responsible governance. This and many other debates are activities in that direction i.e how we can all change the culture of political behavior, that we as a government are strongly committed to doing it,” he noted.

The journalist Sashka Cvetkovska addressed the debate, by thanking the Government for changing the attitude towards journalists and the media. However, she additionally stressed out that certain Ministers and public were still not active in giving information to journalists. According to her, the remaining problem is the “responsibility” or irresponsibility of the institutions. Even when information about state officials’ power abuse is revealed to the public, institutions are rarely reacting.

Selmani met with President of the Criminal Court Ivan Dzolev

We require equal treatment of attacks against journalists and politicians