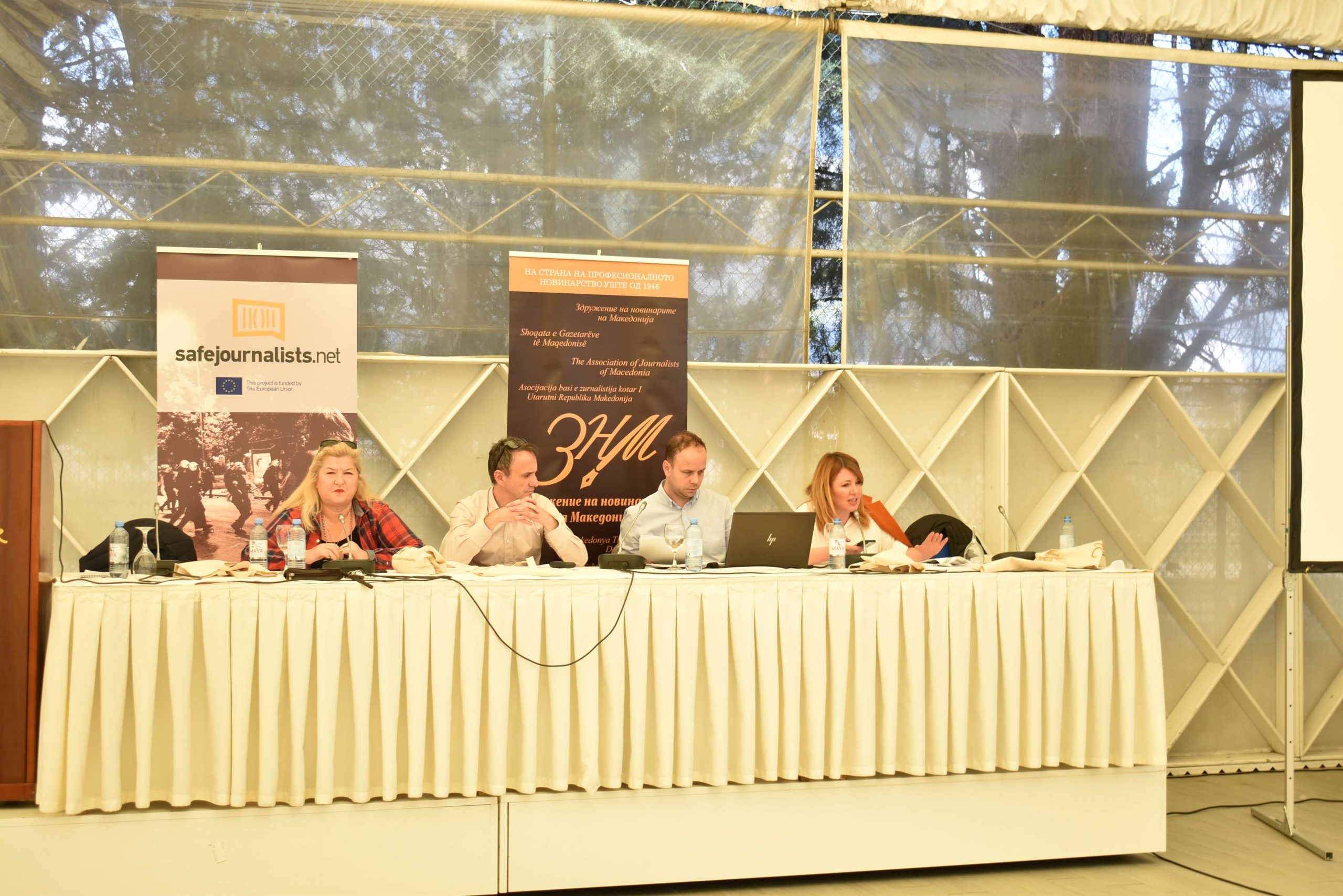 The Association of Journalists of Macedonia (AJM) on Saturday, May 7, held its Annual Non-election Assembly, which was attended by regular members of the Association.

The President of AJM, Mladen Chadikovski, had an introductory address, emphasizing that despite the difficult pandemic conditions in 2021, the association managed to provide support for the implementation of several projects, trainings and events and meetings involving over 400 participants.

“2021 was another year of challenges. In difficult working conditions and health crises  due to the pandemic with Covid 19 worldwide, but also at home, in our country, AJM managed to persist in its commitments set out in the Strategic Plan of 2019 and to continue working on its implementation,” said Chadikovski.

Chadikovski highlighted the activity of the AJM sections, the efforts to change the Criminal Code which is still in the parliamentary procedure and the efforts of AJM to reduce the impunity of the perpetrators of attacks on journalists and the violation of their rights: “In 2021 within AJM were active the sections of journalists, especially the Section of Camera operators, which during the last year realized several regional meetings dedicated to improving the mutual cooperation and solidarity functioning. A positive step that is important for the association is the creation of the Section of Young Journalists within AJM. The members of this section are already actively working on their strategic plan for future action. As a result of AJM’s persistent demands, the Government of North Macedonia accepted the proposed amendments to the Criminal Code, which are in line with the recommendations of the Council of Europe, in order to establish a more effective system for the protection of journalists, while discouraging potential attackers in the future”.

Sashka Cvetkovska, who is the coordinator of the Section for Young Journalists, regarding the opportunities and potentials of young colleagues said: “Using young people in the production of journalistic products is one thing, but the greatest opportunity to encourage change through journalism today lies in global connection: to prepare the next generation of citizens of the world who will have the skills, understanding and courage to solve the global problems of today in their time. For that to happen, there is a need for greater involvement of young people in the newsrooms and it is especially important to give them the key skills and to provide them with an environment in which they will evolve.”

Several important topics were discussed at the Assembly, including amendments to the Rulebooks and the Statute of AJM for inclusion of representatives from the AJM Regional Centres in the Management Board, defining the goals of the Section of Young Journalists at AJM and debate on difficult economic conditions in which the media are, primarily regional and local media. The Executive Director of AJM, Dragan Sekulovski referred to the Narrative report for 2021, i.e., the implementation of the activities for last year, as well as the Financial and Audit report of the Association.

At the event, Milan Spirovski, project researcher at AJM, presented the report on “Indicators of freedom of expression and media independence in Macedonia for 2021”, which elaborates on new trends in the state of media freedom and safety of journalists and the implementation of the existing national legislation related to the media in the country.