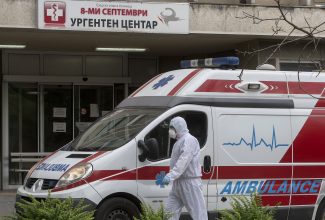 According to several reports from colleagues which arrived at the offices of AJM and the Journalists’ Union, during the weekend and today, journalists and cameramen were not allowed access by the hospital security and were even chased away from the hospital parking lot.

We point out to the Ministry of Health and the managers of the CGH “September 8” that they must not restrict the access of journalists to report on topics related to the work of the hospital and the pandemic.

Aware of the sensitivity of the topics on which there is special public interest, it is necessary to provide conditions where journalists will have the opportunity to report. We remind you that freedom of expression is constitutionally guaranteed right in the Republic of North Macedonia which no individual can restrict because it would mean violation of Article 16 of the Constitution. Especially when it comes to topics of exceptional public interest.

Journalists and editorial teams, especially in such conditions of crisis, need to report in accordance with the ethical principles of the journalistic profession by protecting the privacy of citizens which can be part of the footage. We remind you that according to the Code of Ethics of Journalists, the journalist will respect the privacy of the person, except when it is contrary to the public interest and in addition, the journalist is also obliged to respect personal pain and grief.

If the citizens have remarks about the work of the journalists and the media, we remind them that they have the opportunity to submit complaints to the Council of Honour or the Council for Media Ethics in Macedonia.

At the same time, we ask the Ministry to withdraw the decision for filming in front of the triage center and around the hospital “September 8” only with the permission of the director of the hospital or the Ministry, because it directly disables the work of journalists and photojournalists reporting on the situation in hospitals.

AJM, SSNM and CMEM representatives had a meeting with Minister Filipce: There is no restriction on filming, journalists should continue their work smoothly