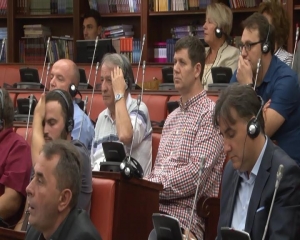 Commission for Transport, Communications and Environment, today in Parliament held a public hearing on the draft law on information and advertising campaigns of public institutions, besides MPs, representatives of the Association of Journalists and the media were present.

The President of AJM Naser Selmani strongly opposed the idea of passing a law that is unconstitutional and suspends press freedom, without which any democratic society could not function.

Selmani repeated that the bill would legalize and expand the corrupt relationship between the government and media owners.

“In 2013 in a media market of 20 million euros, the government participated with 7 million, it contributes more than 30 percent in the financing of the media. It is known that one that funds also controls the media. The intention is clearly to turn the media into a bulletin board for the authorities and kill any criticism, “said Selmani.

He noted that the published wiretapped conversations unequivocally confirmed an association between government advertising and the intrusion of government in the editorial policy of the media.

According to him, government advertisements have no public interest but represent mere partisan propaganda of the ruling parties. He recalled that the ministers themselves openly speak that with ads the government had to address her electorate and to brag about its successes.

“What’s the health minister if not to build hospitals, to equip hospitals, just to improve health services for the citizens. Following that logic and Parliament should have media campaigns and to brag about the adopted laws, or doctors boast that treated patients. This illustration is to show to what absurdity things have gone “, stressed Selmani.

Place government advertising, AJM stands for subsidizing the media, the government will finance the production of media content of public interest.

The parties will not give up their control over the media