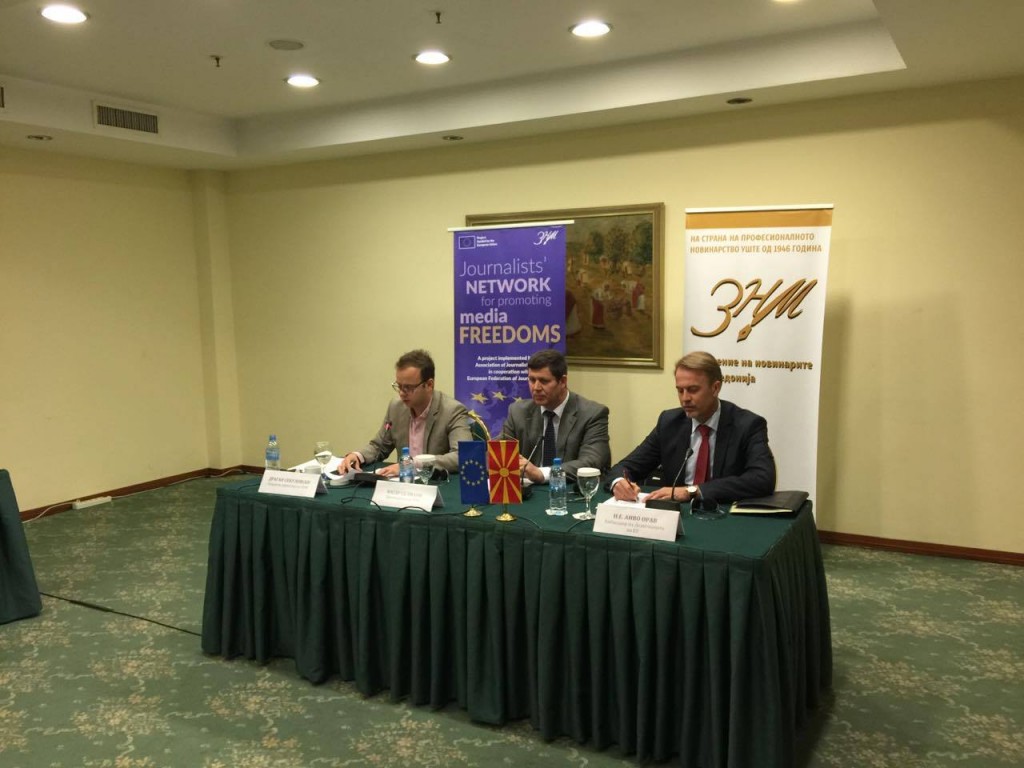 Independent, pluralist and free media are essential for democracy in every country and for the welfare of its citizens. They increase transparency and accountability of authorities related to matters of public interest, said the Ambassador of the EU Delegation in Skopje, HE Avio Orav in his speech.

Ambassador Orav said that the challenges facing Macedonia related to freedom of expression are numerous, lack of fair and balanced reporting, self-censorship among journalists, transparent public institutions, the need for an independent regulatory body and financing of the media is not sufficiently transparent. “We all know that citizens should be fully informed in order to be able to build an opinion and participate in the decision-making that affects their lives”, said Orav. According to him, any intimidation or violence against individuals for expressing opinions in public is unacceptable.

President of AJM Naser Selmani will push for greater solidarity from journalists to colleague Zoran Bozinovski, detained in prison “Suto Orizari” due to the alleged conspiracy named “SPY”. Selmani expressed concern that most Macedonian media did not report on the case of Bozinovski they even avoided to mention his name from the event AJM organized in front of the prison. “It is not the time for an academic discussion about what is good journalism, but it is a critical time when we need to save the belief that Macedonia can have free and professional media” said Selmani and called for greater solidarity with Bozinovski.

Director of AJM Dragan Sekulovski said that the objectives of the project, which will be implemented in the next three years are to improve the actual reporting of journalists by organizing various educational trainings and strengthen the system of self-regulation. “The project will monitor court cases against journalists for defamation,” said Sekulovski. He talked about the regional project, the implementation of which involves six Balkan associations of journalists, with the sole aim of promoting media freedom in accordance with European standards. It is envisaged for an online platform for early warning to be created, through which a network of joint lobbying for journalistic associations will be implemented, improving the legal framework and its proper implementation.

There can be no media freedom with jailed journalists

Journalist Bozinovski gave his testimony before the investigating judge