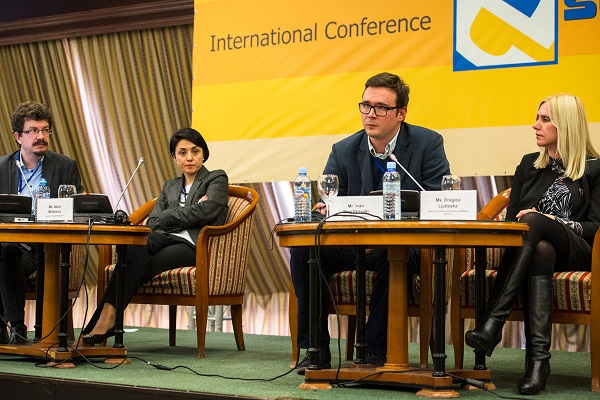 Representative of the Association of Journalists of Macedonia, Ivan Breshkovski, took part at the conference called “E-society”, where they discussed the ways of regulation in the media, the public service, trust in the journalists, freedom of expression in the society , as well as potential reforms in the media sphere.

Breshkovski in his speech referred to the laws relating to the media and their activities. “As a basic law that regulates the work of private broadcasters, but also the public service is the Law for Audio and Audiovisual Media Services (LAAMS) which is currently being discussed on a public debate, in order to ensure the financial and institutional independence of the Macedonian Radio Television (MRT) and the media regulator,” said Breskovski.

Breshkovski stressed that it is very important to mention the court practice in the cases against media, and especially against journalists. In the past, this was an instrument for pressuring journalists. “In 2012 there were over 300 cases against journalists. Therefore, AJM initiated a new civil law for these acts, which will protect the rights of journalists and will give an opportunity through a denial and correction in order to avoid long and expensive court proceedings. Today, these defamation and insult procedures for journalists are rarer. Information from June 2017, says there are only 39 cases. That is a positive trend, so that journalists are not intimidated,” he said.

Then Breshkovski referred to the analyses of AJM, the experts of the European Council and OSCE according to which, during the implementation of the law for defamation and insult, it’s important the that the courts refer to the ECHR practice while making the decisions, or to cite concrete cases where they explain their decisions.

He also said that in terms of procedures for defamation and insult, the long deadlines remain, and they are not respected by the Court. “The Court must protect the rights of the victims in accordance with the ECHR practice, especially when it comes to online media,” he said, adding that the Court in Skopje has a bad practice to exclude persons (legal or physical) from liability for insulting or defamation expressed through an online media. “By doing so, the Court shows that it does not count the online media as a service for public information and therefore does not consider them as liable. This practice of the Court needs to be changed”, he stressed.

According to Breshkovski, an important process for preventing lawsuits against journalists is the promotion of self-regulatory mechanisms in the media in order to resolve an eventual dispute outside the court, which helps in avoiding the expensive court costs, lengthy proceedings and achieving an effect that raises public awareness for the importance of professional standards of the journalistic profession.

Selmani: The government wants to have a monopoly over the truth

Over-regulation in the media creates self-censorship