The absence of stable economic climate, combined with the frequent political crises and the democratic deficit in the country, is increasingly a reason for mass emigration of young people abroad. On the other hand, the high unemployment rate of young people in the country, as well as their unstable financial situation, are key factors that affect the degree of their socialization and integration into the community. These conditions, along with other factors, carry with them the potential for radicalization of the young person, which, in turn, can have fatal repercussions not only on him, but also on the life of the whole society, especially in multi-ethnic environments.

CSOs that focus on young people can significantly contribute to the prevention of radicalization, through their activities and with continuous commitment to young people to be active stakeholders in the society in which they live and work.

According to the assessments of civil society organizations in the Republic of North Macedonia, young people are the most vulnerable category and often are the target of extremist recruiters. The Coalition of Youth Organizations “SEGA”, which for the last three years has been actively working on the prevention of radicalization and violent extremism among young people, points out that the main reasons are the search for identity, the need for significant place in society, expressed feelings of injustice youth in society. Extremist groups exploit the vulnerability of young people in exchange for their social security.

He added that the document covers wide range of measures, addressed to the ministries of education and science and the interior, to municipalities, social work centres, health facilities, religious communities, sports clubs and other civic associations. These are, in fact, the social actors that have the capacity and legitimacy to prevent violent extremism and radicalization of the young man.

“Last year we were involved in project to raise awareness among young people about social inclusion, their active participation in promoting tolerance, cohesion and respect for human rights,” explains Ilieski and believes that this is one of the ways to prevent youth radicalization.

The rise of youth radicalization that leads to violent extremism is serious problem on global level, which of course, does not avoid our country, noted from the “Youth Union – Krushevo.” According to this youth organization, the political radicalization of young people by emphasizing interethnic relations and indoctrination with nationalist ideology is particularly worrying.

“As youth organization, we strive for sensitization in relation to all problematic aspects that lead to any radicalization and extremism among young people. In the last two years we have been actively working on intensifying and improving the relations between the young people from North Macedonia and Greece. Nationalist radicalization among young people in the border region still exists, despite the signing of the Prespa Agreement. Therefore, we are actively working on establishing offices for youth cooperation and raising awareness in the public discourse about the importance of youth involvement in reconciliation processes. Building institutional mechanism for bringing together young people from both countries, providing them with unique opportunity to cooperate and get to know each other, are key factors in overcoming nationalism and prejudice among young people,” said Anelija Mitrova, part of the “Youth Union Krushevo” team.

In 2018, the Government adopted the National Strategy for Prevention of Violent Extremism and Fight against Terrorism. This document has time frame for implementation until 2022. For more efficient implementation of the Strategy, Action Plans have been prepared which have also been adopted by the Government.

There is also National Committee for Combating Terrorism and Preventing Violent Extremism in the country. Several institutions participate in the work of the Committee, including the Ministry of Education. This body works on the adoption of strategic documents related to the detection and prevention of various forms of violence and antisocial phenomena, which are then incorporated in the curricula. Thus, according to the relevant Ministry, students from the earliest age, from the beginning of formal education until the end, learn about the dangers of participating and acting in organizations whose goals are associated with violence and terrorism.

Apart from the state institutions and the coordinated approach, number of civil society organizations from the country and external partners are involved and support these activities. The development of National Standards for Primary Education is in the final phase, which determines the competencies that students should acquire at the end of primary education. They incorporate the key competencies for lifelong learning, included in the Recommendation of the Council of the European Union from 2018.

The Ministry of Labour and Social Policy also has member in the body for National Strategy that works on the elimination of violence and the combat against terrorism. All activities, according to the Ministry, are carried out in accordance with the legal competencies and the existing capacities, institutional as well as human resources. They explain that these activities involve professionals from the centres for social work, such as social workers, psychologists, pedagogues and lawyers. The Centres for Social Work are obliged, in accordance with the Law on Social Protection, to accept foreign terrorist fighters who have served prison sentence, if they request any assistance, in terms of psychosocial support or legal assistance in obtaining personal documentation if they have lost it. These activities are carried out in coordination with all institutions, such as the Administration for Execution of Sanctions, social worker from penitentiary, as well as local administrations for internal affairs.

We did not receive answer to the request for information on how the Ministry of Interior and the Agency for Youth and Sports act on the topic of prevention of young people so that they do not fall into terrorist groups or organizations, for the needs of this text.

Cross-sectoral cooperation as a factor in the fight against terrorism 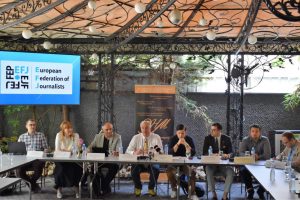 Round table on “Sports Journalism – a warning before exclusion 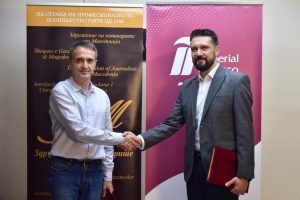 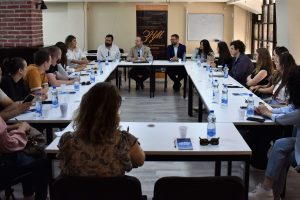