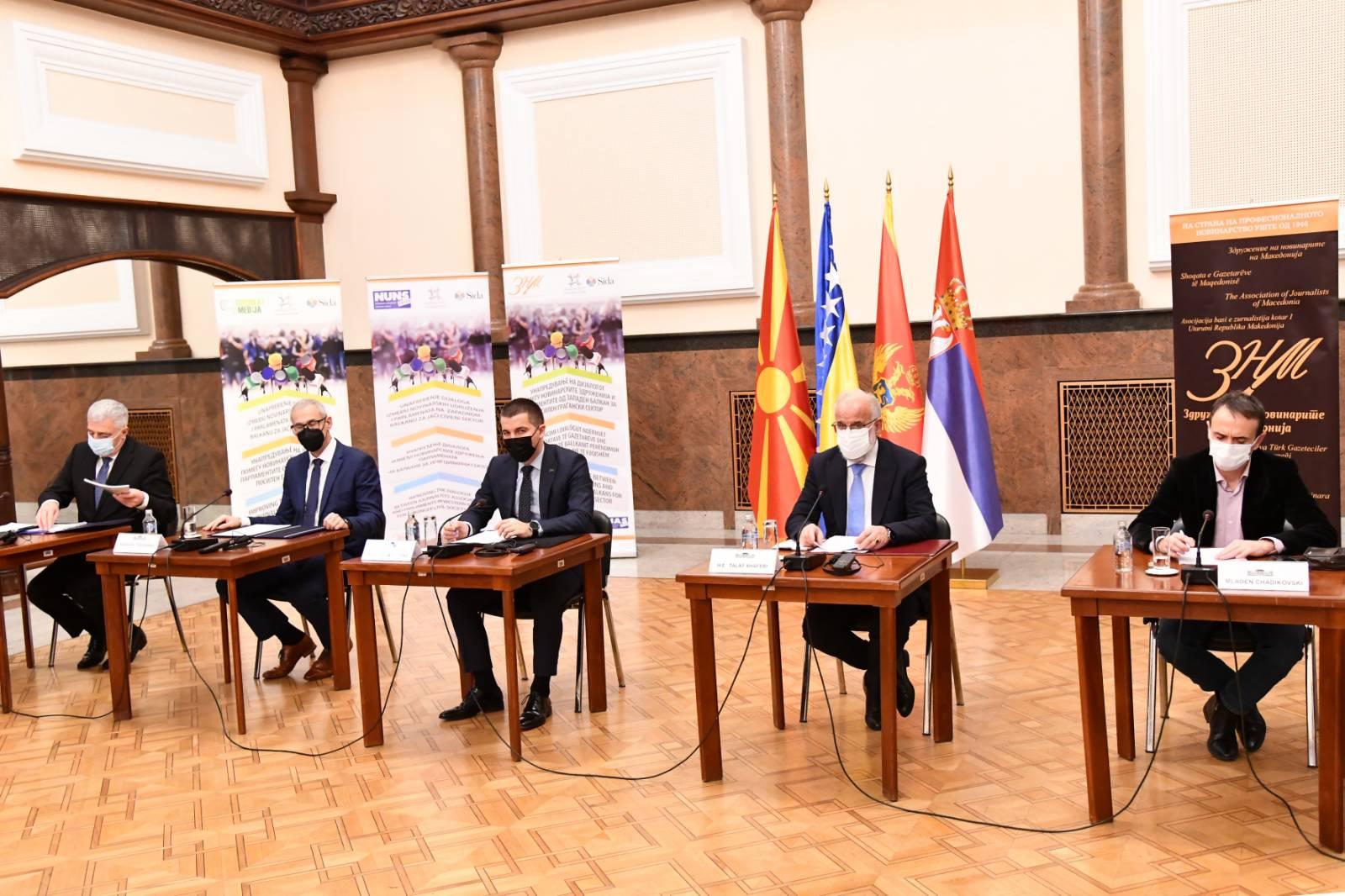 On November 26 in the Parliament of RNM was held the regional conference on “Promoting the dialogue between the parliaments and the journalists from the Western Balkans” which was organized by the Association of Journalists of Macedonia (AJM) in cooperation with the Parliament of the Republic of North Macedonia.

The purpose of this Regional Conference is to promote the dialogue between MPs from national parliaments and journalists’ associations in the Western Balkans in order to improve the freedom of expression as a basic human right and to strengthen the role of civil society organizations.

At this conference, representatives of the four parliaments and journalists’ associations from the Western Balkans signed a joint Declaration for promotion of dialogue between parliaments and journalists’ associations from Western Balkan and agreed every year to organize regional conference in one of the countries in this region.

The President of the Association of Journalists of Macedonia, Mladen Chadikovski addressed to the participants and guests and said: “Without preconditions for a free political arena, the MPs cannot serve the citizens who elected them. Without preconditions for safe work of journalists, we journalists cannot serve the citizens with dignity in the direction of on time and impartial reporting. That is why we gathered today, so that you can feel the real responsibility of your parliamentary seats, and we may hear the other side of the story. I know we are not sinless. Journalism lives in an era that tries to be part of propaganda and false narratives, but we professionals have a responsibility to point the finger at those who cause problems in our ranks.”

The President of the Assembly of R. North Macedonia, Talat Xhaferi said he was honoured to be part of a conference that aimed at improving dialogue between parliaments and journalists. He said that the media have great importance for every country, but they are also present in every corner of the world. Every law shows its weaknesses through implementation in the society, and it is the laws that bring the safety of the journalists, which is essential for every country.

“We must continue to work on the unequal treatment of journalists so that there are no attacks and threats. There is still a lot to be done, but this conference is a good start, and the signing of the joint declaration is a sign for strengthening this cooperation.”

The Speaker of the Assembly of Montenegro, Aleksa Bečić, also addressed the audience and welcomed the initiative for cooperation between journalists and parliamentarians by emphasizing that journalists have a great responsibility in publishing information, which bears similarities with MPs who are also accountable to the citizens who elected them. “This conference sets new standards for dialogue between journalists and parliamentarians,” Bečić said.

He was followed by Radovan Tvrdisic and Lazar Prodanović, who also emphasized the importance of co-operation between the two sides, which will serve as a support for the European perspective of the Western Balkans and expressed hope that it would be a good practice for future regional co-operation.

Representatives of the Western Balkan Journalists’ Associations, Dragan Sekulovski, Executive Director of AJM, Radomir Krackovic, Vice President of the Montenegrin Journalists’ Union, Željko Bodrožić, President of the Independent Association of Journalists of Serbia, Borka Rudic General Secretary Journalists from BiH also addressed the audience. In the working part, Bojan Vasilevski, Deputy Secretary General of the Assembly of the RNM, Dragan Bojović, representative of the Assembly of the of Montenegro and Zlatko Vukmirović, head of the information service of the Parliamentary Assembly of Bosnia and Herzegovina

The conference was organized within the regional project “Improving the dialogue between journalists’ associations and parliaments in the Western Balkans for a stronger civil society sector”, funded by SIDA within the project “Protection of Civil Space – Regional Centre for Civil Society Development” implemented by BCSDN.

The campaign within the regional project: "Improving the dialogue between journalists' associations and the parliaments of the Western Balkans for a stronger civil society sector" is completed