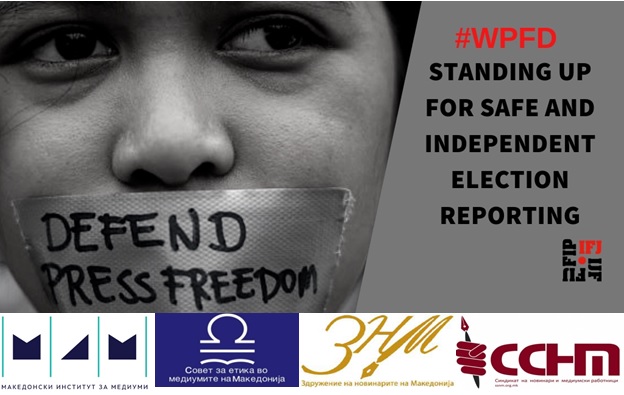 The Council of Media Ethics of Macedonia (CMEM), the Association of Journalists of Macedonia (AJM), the Independent Union of Journalists and Media Workers (SSNM) and the Macedonian Institute for Media (MIM), on the occasion of celebration of the World Press Freedom Day, May 3rd, would like to recall to the need for serious engagement of all relevant actors in undertaking the major reform steps in the media sector in the country.

In the past period some efforts were made, resulting with improvement of the working environment for the journalists and media workers, which in turn, improved the country’s image in the international media freedom reports. For illustration, our country is ranked 95th according to the latest World Press Freedom Index of “Reporters Without Borders”, going up 14 places in comparison to 2018’ report.

However, we would like to remind that the key systemic changes in the media sector are not yet completed, such as the reforms in the public broadcasting service and the media regulator. In addition, commercial media continue to face strong challenges due to the small and limited media and advertising market, which in turn affects the quality of the media content. At the same time, we appeal to the  Government and the institutions of the system, when bringing decisions considering improvement of the situation in journalism and media content to coordinate it with the professional media and journalistic community in the country.

In the first half of 2019 more incidents were noted where the rights of the journalists, cameramen and other media workers were violated, to what we have been constantly pointing out. We appeal to the Public Prosecution Office and the courts processes and finalize the cases in which the rights of journalists were violated, as well as the cases that include hate speech, in order to overcome the long time existing impunity practice and to prevent injustice towards media community.

We would like to remind to the need of taking urgent measures regarding labor rights of the journalists and media workers, taking into consideration that half of them are without employment contracts, especially in the online media sphere. In that direction, we expect the institutions to sanction the constant breaches of the Labor Relations Law and to ensure climate that will encourage social dialogue and resolution of the issues concerning labor conditions.

The four organizations will continue to advocate for strong promotion of the media self-regulation as a mechanism for enhancing the professionalism, ethics and independence in the media, prevention of influence of different centers of power and mechanism that allows the public to receive quality and independent information.

Prior to the second round of voting for the President in the country, the four organizations would like to remind the media to their duties to report professionally and according to the principles stated in the CMEM’ Charter on Ethical Reporting during Elections:

–  the principle of balance,

– clear distinction between information and comments,

– respect and tolerance and

Association of Journalists of Macedonia (AJM)