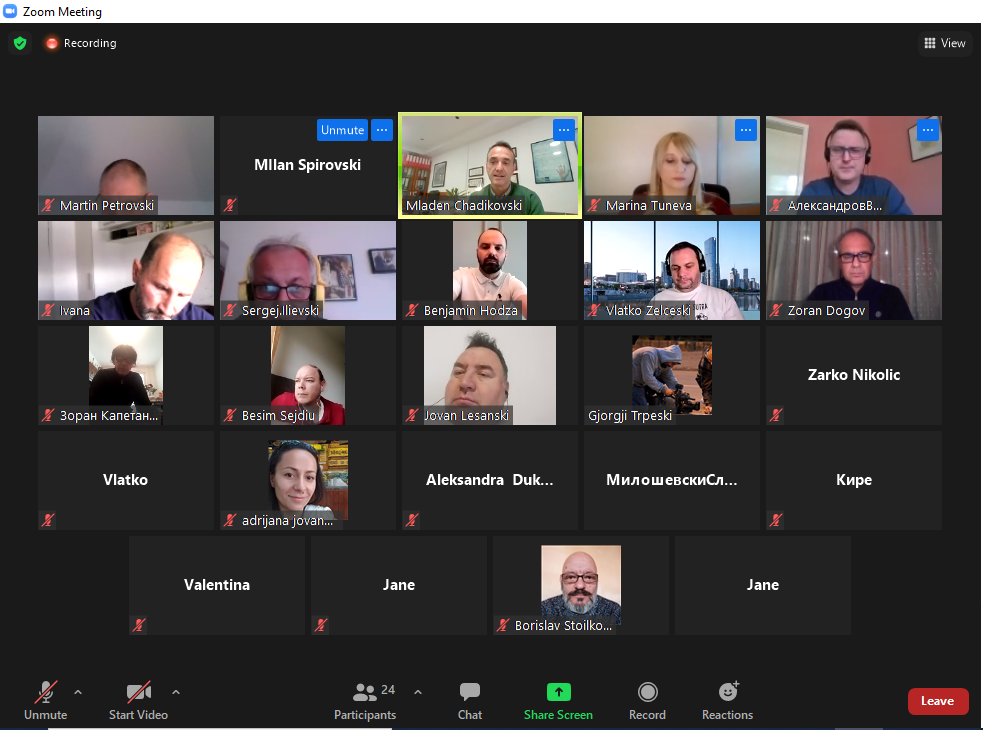 In order to improve the working conditions of the camera operators, the Association of Journalists of Macedonia (AJM) on March 6 organized two-hour online workshop for professional camera operators and journalists. At the workshop, which was attended by about 20 participants, were discussed the problems and challenges of covering events in times of crisis, such as pandemics, quarantine, curfew, and election campaigns.

At the beginning of the workshop, the President of the Association of Journalists of Macedonia (AJM) Mladen Chadikovski welcomed this initiative and the activity of the camera operator section of AJM. He stressed that the status of camera operators and journalists is included in the efforts and proposals to amend the CC in cooperation with the Ministry of Justice, more specifically regarding the treatment of attacks on journalists and camera operators as attack on an official.

In the role of panellist Robert Kocev from“Al Jazeera” pointed out that, there are often misconceptions about the profession of “cameraman”. They are added additional responsibilities, which are not part of the job description, he said. According to him, it is especially important to keep in mind with what equipment they work with as well as for certain events they need special type of equipment.

According to Vlatko Aleksandrov from “Telma TV”, the cameramen were especially exposed to risks during the early parliamentary elections, when they had to follow events, which often did not respect the measures for protection against the coronavirus (such as political party celebrations). The space conditions in certain institutions did not allow the necessary distance to be kept, which put the camera operators directly at risk. According to him, it is of particular importance to take into account, in conditions of pandemic how to improve the working conditions of the camera operators during the upcoming local elections that will be held next autumn.

According to Zoran Dogov from “TV Kanal 5” during the pandemic, the situation was complicated, noting that in some institutions the measures are not observed in full, which directly endangers the safety of the camera operators themselves.

Benjamin Hoxha from “TV21” pointed out that equipment is often saved in the newsrooms, in some cases it is worn out, not serviced, so there are problems with the recording. According to him, sometimes there is lack of awareness of this profession in the newsrooms themselves, so it is necessary to work with the management, both to build capacity to understand the profession of “cameraman” and to provide better working conditions.

The performance of this profession is seen as teamwork, with journalists, editors, drivers, etc. and, therefore, good coordination and compliance is necessary.

The discussants, among other things, appealed to create IDs / Passes for access to public institutions. They asked the Association of Journalists of Macedonia (AJM) to organize a meeting with the PE Parking of the Municipality of Centre (POC) to provide parking opportunities close to locations of events, so as not to waste time, which reflects the timely coverage of events.

Trajche Ilievski from “MRTV”, in addition to the appeal for easing the parking conditions and the accelerated process of vaccination of camera operators due to the risks they are exposed to, stressed that the main goal of the camera operators in the future is to treat this profession as an authorial profession i.e. profession from which copyright works arise.

Attendees of the event also mentioned the need to regulate the remuneration for work during the weekend, sending message to consider the possibility for beneficial work experience of the camera operators

The guest from Serbia, the camera operator from the public service, Goran Koprivica, pointed out that similar problems have been observed in Serbia and the region, but that North Macedonia is the first with such initiative, i.e. with the establishment of Cameramen Section. The Association of Journalists of Macedonia (AJM) does not stop here with the initiatives related to this profession. Together with the Cameramen Section, will be active partner in the process of increasing and improving the working conditions of both journalists and camera operators, because it is in the common interest in improving the working conditions.

AJM with constructive proposals for improving the Rules of Procedure