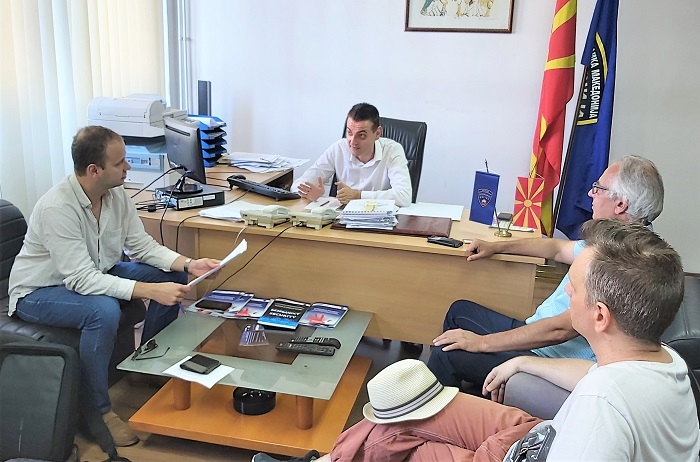 Representatives of the Cameraman`s section within the Association of Journalists of Macedonia and the Director of AJM, Dragan Sekulovski met yesterday with the spokesman of the Ministry of the Interior,  Toni Angelovski. At the meeting they discussed about  improving and facilitating the working conditions of cameramen during events organized by the Ministry of the Interior. Angelovski was informed that the Association of Journalists of Macedonia has prepared a draft manual for the work and safety of cameramen in which it is expected that the Ministry of the Interior will contribute by providing directions about filming of strategic facilities and VIP persons which require special permissions.

Director Sekulovski announced that the Association of Journalists of Macedonia following the best practices of the European countries, will work on the preparation of a protocol under which police officers will have to act in cases of attacks on journalists and media workers, and it is expected that the Ministry of the Interior will be involved in the process of preparing this document. The protocol is expected to be ready in the fall, and spokesman Angelovski promised that the MoI would also contribute to the drafting of the protocol.

In addition, the coordinator of the Cameramen`s Section, Slave Stojanovski, together with his colleague from the Macedonian Radio-television, Trajche Ilievski requested greater coordination between the Ministry of the Interior and other institutions regarding the accreditation of journalists and media workers during public events and press conferences in order for them to be able to work as efficiently and effectively as possible.

Angelovski has announced the creation of a new media center in the complex of the Ministry of Interior, which will improve the working conditions of journalists and cameramen for reporting from events organized by the MoI.

AJM: Some of the measures in the Government’s plan are problematic