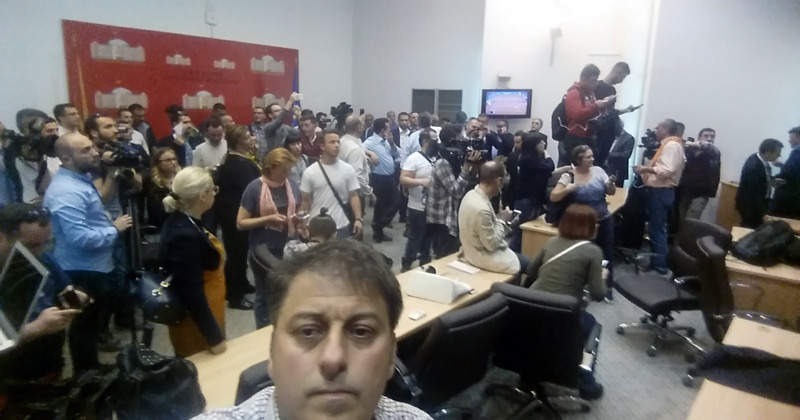 The Basic Civil Court in Skopje today rejected the lawsuit for obstruction to the right to information of the citizens as well as for non-material damage for fear and mental pain of Goran Trpenovski, who reported as a journalist for the online media SAKAMDAKAZHAM.MK (sdk.mk) during the incidents from the Assembly of RNM on April 27, 2017.

In the verdict, Judge Jovanka Spirovska Paneva explains that at that time Trpenovski was not journalist as he worked at the online media SAKAMDAKAZHAM.MK, which according to the Law on Media, according to Judge Paneva is not considered as media. In addition, the court in this verdict does not recognize the right to information as constitutional category, assessing that at that time, the colleague Trpenovski was prevented from informing the Macedonian public about the events at the Assembly of RNM and consequently, has no right to claim damage.

This judgment is troublesome in several aspects, first that it is not in line with the case law of the European Court of Human Rights, where it is indisputable that online media are media and journalists working in these media are journalists and our courts have obligation to follow ECHR practice.

Second, the court with this verdict does not respect the conclusion of the four appellate courts in the Republic of North Macedonia, and when deciding on insult and defamation proceedings when the online media appear as party before the first instance civil courts, must have the same treatment as traditional media as of May 2019. This conclusion of the four courts of appeal should be lesson that in all other proceedings where journalists from online media seek justice before the courts must not be rejected by an explanation that they are not journalists.

Such court rulings endanger the freedom of speech and discredit the journalistic profession as well as the role of the media in democratic society, for which AJM in the coming days will inform the international organizations that monitor freedom of expression in our country.

Police officers must not obstruct the work of journalists