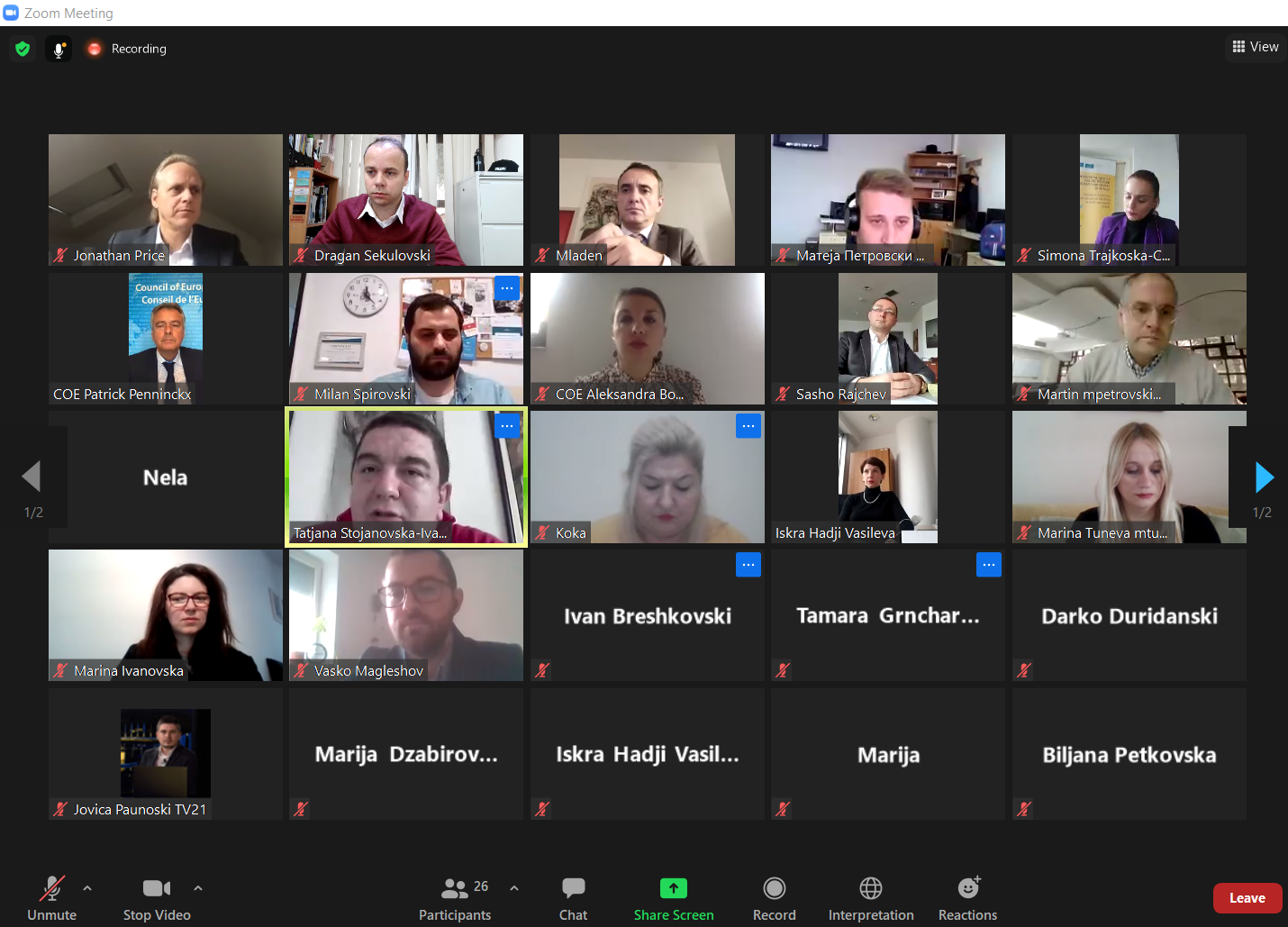 On November 24, webinar was held on the topic: “Amendments to the Criminal Code: A solution to strengthen the security of journalists” organized by the Association of Journalists of Macedonia (AJM) and the joint action of the EU and the Council of Europe “Freedom of expression and Freedom of the Media in North Macedonia (UFREX).”

The main conclusion from the event was that only through concrete amendments to the Criminal Code by giving the prosecution the authority to act ex officio and by increasing the sentences of the attackers, the security and the policy of impunity for journalists and media workers will be systematically improved. As the event unfolded, the Ministry of Justice responded on social media, indicating that the Criminal Code along with the AJM and the journalists’ union, would soon be revised to increase the safety of journalists. In the announcement, the Ministry additionally noted that the new laws are not as necessary as the need for more efficient action by the competent institutions for investigation and sanction of attacks on journalists.

The webinar was attended by thirty participants, including group of journalists, representatives of the Government of North Macedonia and the Ministry of Justice, the Council of Europe, the Basic Public Prosecutor’s Office and lawyers representing journalists before the courts. The Minister of Justice Bojan Maricic had his video address and in the introductory part there was a speech by Patrick Penninckx, Head of the Information Society Sector, Council of Europe. The webinar was also attended by Saso Rajcev, Chief Prosecutor at Skopje Prosecutor’s Office with journalists who cover security issues, as well as a foreign expert in the field of media law.

One of the goals of this event was to debate the ways to find solutions for institutional protection of journalists and media workers and thus to contribute to the consultation process led by the Ministry of Justice to amend the Criminal Code.

In his speech, Minister Maricic emphasized that the Ministry of Justice has already started procedure for drafting new Criminal Code with the required changes, which will include criminal acts that will raise the level of protection of journalists and media workers in general. “In order to prepare quality text in the law, we have already held meeting with the representatives of the journalistic profession and journalistic associations, including the Association of Journalists of Macedonia and the Trade Union. Their proposals are certainly welcome because only through open dialogue with the journalists will we be able to pass new law that will further protect them with aim to do their job freely, and all those who will try to intimidate them or physically and verbally attack journalists, i.e. media workers, should be rigorously punished,” said Minister Maricic.

Patrick   Penninckx, from the Council of Europe, congratulated this multilateral process between key stakeholders, Government, ministries and journalists. He pointed out that so far we have been accustomed to such important topics of unilateral solutions that have proven to be dysfunctional. “I welcome the initiative for this type of webinar where we have opportunities to jointly discuss the implementation of the Criminal Code in North Macedonia and to identify those specific provisions in the law that would regulate and improve the guarantee and safety of journalists. As the number of threats increases annually, the pressure on journalists deepens. This form of pressure also acquired gender-specific nuances in the attacks on journalists, which proved to be predominantly gender-biased, both online and offline. Therefore, I strongly believe that in such joint discussion with you, stakeholders and foreign experts, we will open joint dialogue in the interest of promoting the legal protection of journalists and journalism in North Macedonia.”

The President of the Association of Journalists of Macedonia, Mladen Chadikovski in his address emphasized that journalists and media workers play key role as guardians of the public interest, and the journalistic profession is important part of any democratic society. “I do not like the current trend of attacks on journalists at all, it seems to me that we are entering phase of democratic recession, especially since the Euro perspectives globally are closing due to the problem with Bulgaria. We would not like to see retrograde processes, and this trend points to that. It is important to point out that impunity inevitably leads to self-censorship or censorship, restricts the space for free media and deprives the public of the right to be informed,” added Chadikovski.

Filjana Koka, an experienced journalist from MRTV, added that “New and appropriate legal provisions and new climate suitable for media that support democratic processes are needed. The authorities were and are called to invest in creating security so that journalists can do their job freely and independently without any pressure being exerted on what they report, AJM and the journalists will not give up on that.”

Colleague Vasko Magleshov, journalist from PRISMA / Investigative online media, in his panel emphasized that it is necessary to educate future judges and public prosecutors to be sensitized about the importance of journalistic work by introducing or expanding subject programs freedom of speech and expression and the importance of the journalistic profession in democratic processes.

The Chief of the Basic Public Prosecutor’s Office, Saso Rajcev, also one of the panellists in his address to the webinar emphasized the support of this process by the prosecution and gave brief overview of the answers of the Criminal Law for protection of journalists in North Macedonia. Rajcev stressed that in order to make substantial changes, it will be necessary to increase the resources of the prosecution.

As international expert, Johnatan Price, Barrister at “Doughty Street Chambers” UK, shared in his presentation several comparative cases from law practice in the context of the safety of journalists. He stressed that the problem is not in the laws themselves, but in their implementation. In the end, the recommendation is that there is need for education and revision of the entire elements of the judicial system and of course joint action by all stakeholders.