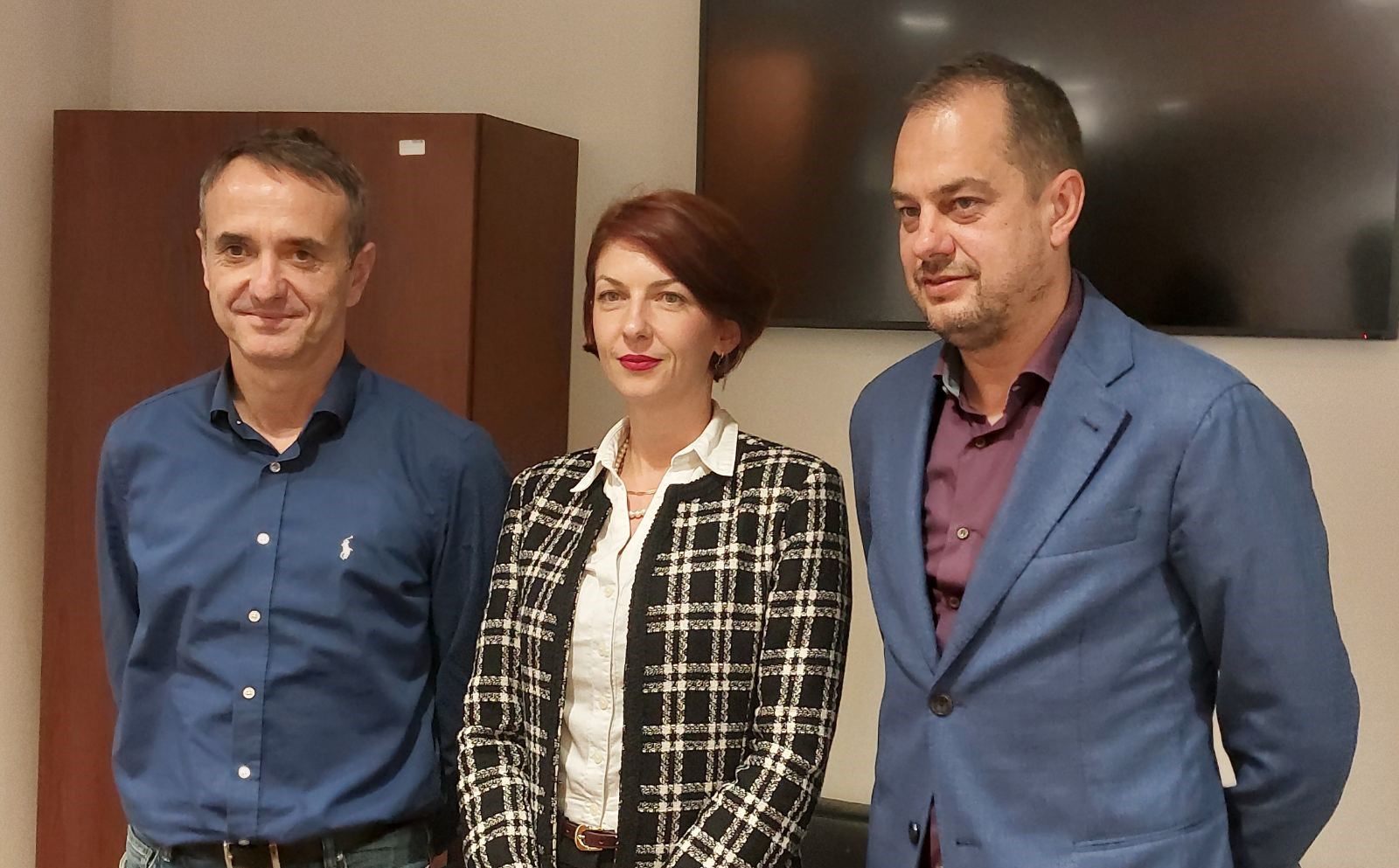 After the appointment of Iskra Hadji Vasileva as a prosecutor who will monitor the proceedings in the cases in which journalists are attacked, in which they are damaged, witnesses or are reported about the performance of their work tasks, Skopje Public Prosecutor Gavril Bubevski and Hadji Vasileva before the Association of Journalists of Macedonia (AJM) specified what the powers of the prosecutor will be.

It is about an open line in the Public Prosecutor’s Office, which journalists can call Hadji Vasileva about the procedures for physical attacks and violence, as well as for severe threats to life on Twitter, Facebook, WhatsApp or by email. Also, for the destruction of property of journalists and media workers if it is related to their work – reporting, recording, published articles, written text, photograph, recorded inserts, as well as for other acts, which were previously reported to the Ministry of the Interior. She will coordinate these procedures.

Until then, the decision remains that in addition to the Skopje Public Prosecutor’s Office, the other public prosecutors’ offices should prioritise dealing with cases related to the safety of journalists and continue to promote cooperation with journalistic associations, to sanction any criminal-legal threat to freedom of expression.

The president of AJM, Mladen Chadikovski, is satisfied that such cooperation was established after a long time because even before Bubevski became the head of the Public Prosecutor’s Office, as he pointed out, AJM was looking for a special department that would prosecute the journalists’ attackers.

“This year, we have an increasing trend of attacks on journalists, especially online attacks. Substantial social changes cannot occur if justice for journalists does not exist, if the judiciary and the media are not freed from external influence, nor can we as journalists perform our profession if we are in constant fear for our safety.

This is an excellent start for stable future cooperation with the Skopje prosecutor’s office through the prosecutor Iskra Hadji Vasileva, appointed to process these cases. Of course, it is best to start at the exact moment and to intensify”, said Chadikovski, the president of AJM.

According to the document submitted by the Public Prosecutor’s Office to the Association, from 2014 until today, 24 more serious physical attacks on journalists have been recorded, and only four have been resolved with a final verdict in favour of the journalists, to the detriment of the attackers. The number is smaller than in 2016 and 2017, but the trend in the last three years is that most threats to journalists’ lives occur online. There are also physical attacks.

Most threats to life in Macedonia happen to female journalists more than male journalists. However, when it comes to physical confrontations or damage to equipment, it usually happens at public protests, at larger gatherings, where journalists, camera operators and photojournalists target certain people at those protests. In those situations, they either have physical contact with one of the crew or destroy their equipment.

In 2022, we have several more severe attacks and positive examples of clearing up some criminal-legal events. A person attacked the colleague Nevrij Ademi from Tetovo with an axe, and there is already a conviction for the accused attacker by the Basic Court of Gostivar.

“AJM regularly monitors court hearings, not only for a criminal prosecution, but also civil proceedings for defamation and insult, and we try to catch a trend: how long the proceedings last, what was the defence like, how the prosecutor acted, how the State Attorney (in the case of April 27), and to determine what are those gaps in the procedures that we have determined to be problematic. In that line, we have a positive example of the first verdict for hate speech on the Internet after a private criminal complaint submitted by AJM to the Ministry of the Interior, which was processed in 5 months. The person who threatened on Facebook was sentenced to a 6-month suspended prison sentence,” said Dragan Sekulovski, the executive director of AJM, who, in this manner, highlighted the small number of positive examples of punishing the journalists’ attackers, pointing to the list of unresolved cases before Bubevski and Hadji Vasileva.

There are 79 severe incidents of violation of journalists’ rights on the list, not only for threats to the safety and lives of journalists but also for other serious violations of their rights. Milder threats and forms of pressure from public officials, politicians, and business people, are numerous and are just as worrying. The prosecutor’s office is requested to shed light as soon as possible and as much as possible on those unfinished investigations because his lack of interest so far has deterred many journalists from reporting threats and attacks against them.

Prosecutor Hadji Vasileva believes that closer cooperation and joint approach with journalists, mutual coordination and information will be necessary.

“Together, we will locate some of the things that are more acute, more relevant and significant when it comes to attacks on journalists. And now, without the legal framework, we are waiting for, we have a field for constructive cooperation. When the intention is sincere, we can improve the situation,” she said.

What is of great interest to journalists is whether the prosecutor will work and coordinate those pending investigations of attacks on journalists or will she deal only with future cases.

Hadji Vasileva says that she has already reviewed the open procedures, is reviewing those under Skopje’s jurisdiction with the team, and is here for additional two-way information.

And one fundamental dilemma was clarified by the coordinator: If the threat or attack were made in the context of journalistic work, it would be considered that the person was attacked as a journalist. For attacks on journalists for other reasons, inter-neighbour disputes or the like unrelated to their work, that procedure will receive general treatment and incrimination. It will not be treated by her and the team of prosecutors in the Skopje Public Prosecutor’s Office that will conduct investigations about attacked journalists.

To the dilemma of how to identify the cases in which the appointed prosecutor will be competent to monitor the proceedings, Bubevski replied that it would not be necessary for the journalists to identify themselves professionally, that is, it would be sufficient if the crime was committed against a person who declared himself as journalist and to establish that the attack was carried out in the context of the execution of journalistic tasks.

In the context of the restrictions in the current Criminal Law, AJM and SSNM have prepared amendments for the new Criminal Law to be adopted by the Parliament. According to the amendments, an attack on journalists will be considered an attack on an official. They would mean a systemic solution to the long-term problems related to journalists’ safety. The Ministry of Justice had a political decision to adopt the changes proposed by AJM and the Trade Union and forward them to the Government and the Parliament.

The amendments were submitted in July 2022. Unfortunately, despite the lobbying of the parties, there is no hope that the AJM and SSNM proposals, i.e. the new Criminal Code, will be adopted in a short time. However, AJM considers, as a positive step, the Prosecutor’s Office is preparing ahead of time for the protection of journalists.

And the importance is pointed out by the latest Report on the progress of Macedonia in the negotiations for membership in the European Union. The prosecutor’s office, the courts, journalists and their rights are in the same chapter 23. One of the recommendations in the section on freedom of expression is that all violence against journalists is urgently addressed and that a quick and efficient approach is needed, with which those who violate the rights of journalists will be brought to justice.

On the other hand, in a situation where the Ministry of Internal Affairs somehow buys time by allegedly waiting a long time to receive data from Twitter and Facebook during cyber-attacks, when it comes to government officials, it resolves those attacks very quickly and efficiently. Practically, at the exact moment, they find and arrest them at airports, or wherever, which in some way creates a revolt among the journalists who were attacked, who suffer serious threats, and the police and the prosecutor’s office do not react.

Regarding the selective reaction of the Ministry of Internal Affairs, Bubevski believes that those threatening officials usually do not hide their identity, unlike those who threaten journalists.

The recommendation that has been underlined since 2016 is that even in the absence of systemic mechanisms, as a member state of the Council of Europe, Macedonia still has a mandatory obligation for its judicial authorities to create special departments and establish protocols for situations related to the safety of journalists. That is, to have a 24-hour open line that journalists can call, even when they have a dilemma about whether a particular attack, threat or pressure on them is a criminal matter or not.

AJM is actively working with the Ministry of the Interior on this issue. By the end of the year, there should be a protocol for the safety of journalists online. Chadikovski believes such a protocol should be established with the prosecutor’s office and prescribe communication with journalists who have been charged with a crime related to their journalistic work.

Hadji Vasileva’s scope of work will also include monitoring procedures where journalists are summoned to witness or when recordings or photos are requested from the media to provide evidence for other procedures. In the beginning, she and Bubevski will arrange the relationship and the manner of communication between the police who work under the orders of the prosecutor and the journalists-witnesses. Journalists and media houses occasionally complain to AJM about the insolent attitude and lack of information from the police when they call for an official interview, as if they are the subjects of persecution, not witnesses.

The conclusions of this meeting were reached at a working session between the BPP and AJM, which was held on October 28 on the premises of the BPP. At the meeting, the need for such joint discussions in the future on topics related to the safety of journalists was ascertained.

The text was prepared within the framework of the regional project “Strengthening media freedom in Bosnia and Herzegovina, North Macedonia and Serbia,” financed by the Kingdom of the Netherlands and implemented by the Dutch Helsinki Committee and Free Press Unlimited in partnership with the Association of the Journalists of Macedonia. The views and opinions of the event participants do not necessarily represent the views of the Kingdom of the Netherlands, the organizations implementing the project or their local partner.

Colleague Ademi was hindered again in his work. The Ministry of the Interior should immediately investigate

<strong>AJM and SSNM: The legal amendments affecting journalists should be adopted as soon as possible in the Parliament</strong>