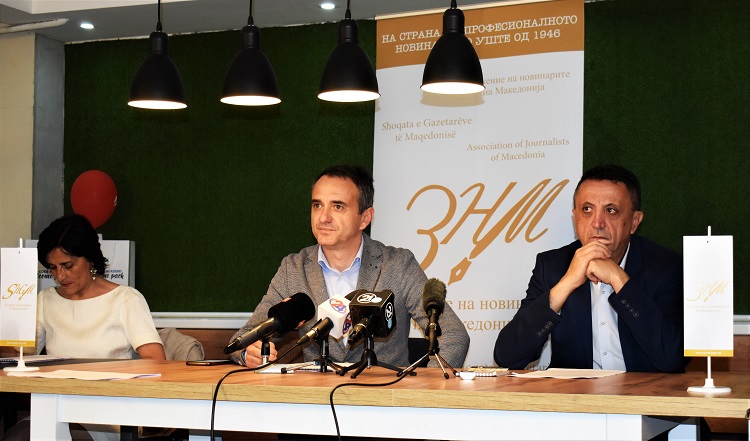 This morning the Managing Board of the Association of Journalists of Macedonia had a meeting on the abolition of the verdict against the journalist Tomislav Kezharovski and the decision of the Supreme Court to return the case to a retrial. At the meeting it was reviewed the decision of the Supreme Court on the case of Kezharovski and unanimously decided that the AJM would insist on fairness of the Court and the Public Prosecution whiled deciding about this case until Kezharovski is set free.

Over the past few years, AJM has continuously supported Kezharovski and will defend this position until justice is done. Therefore, we ask the Basic Public Prosecutor’s Office to withdraw the indictment against our colleague Kezharovski, who was unlawfully accused, and then convicted. By doing so, the BPP will show that it finally decides independently and impartially in the interests of justice. Given that the Supreme Court has returned the case to a retrial, we call on the Skopje Criminal Court to reject the indictment and thus demonstrate that freedom of speech in this country is guaranteed as a fundamental human right.

This is an excellent opportunity for the Basic Public Prosecutor’s Office and the Criminal Court to demonstrate fairness and ultimately put an end to a long and unlawful case against the journalist and the Former Deputy Chairman of the AJM, Tomislav Kezharovski.

We remind that because of this case, North Macedonia, as one of the rare countries that had a journalist in prison, was pointed out as a “not free” country in which journalistic rights and freedoms are not respected. The suffering of Kezharovski affected the image of our country in front of the world, and this was noted in all reports. We don’t want that to happen again.

Therefore, now is the time to make the correction and to show that the institutions in North Macedonia have the capacity to provide an environment in which journalists and media workers can freely and safely perform their work in the interest of the public.

AJM will continue to follow the development of this case by monitoring the work of the judicial authorities until Kezharovski is set free.

Kezharovski was accused of revealing the identity of a protected witness, but the public knows that in his writings he never unveiled the identity, while later during the procedure was proven that the protected witness was false. Taking this into consideration, it is obvious that his case was created in order to shut his criticism.