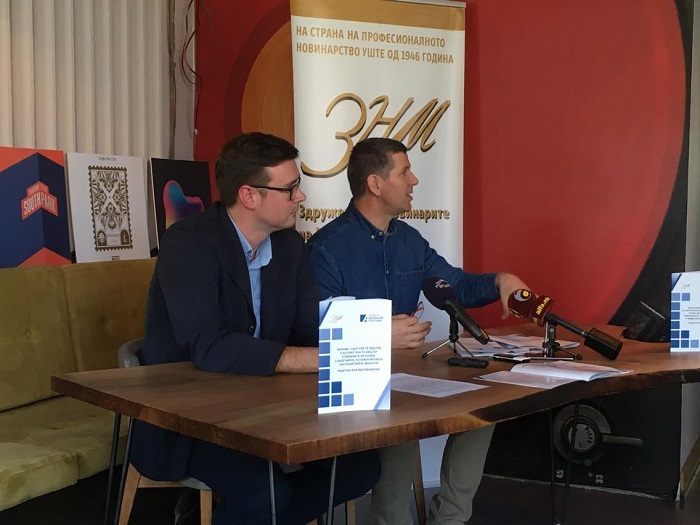 The Association of Journalists of Macedonia today promoted the publication “The Impact of the Law on Copyright and Related Rights on the Work of Journalists, Photo-Reporters and Media Workers”. In it, the authors, Ivan Breshkovski and Igor Markovski give an overview of the importance of copyright for the work of journalists and media workers.

The president of AJM Naser Selmani spoke at the presentation of the analysis, and said that AJM decided to prepare this analysis due to the fact that there is massive violation of the copyrights of the journalists and media workers in the media.

“We believe that copyright infringement directly contributes to the poor social status of journalists, and from journalists and media worker’s work, usually profit those who violate their rights,” Selmani said. He added that this analysis aims to raise the awareness among state institutions for the great importance of respecting the copyrights in the media, as this directly affects the quality of journalism and the freedom of the media.

One of the authors of the analysis, the lawyer Ivan Breshkovski, at the promotion said that this publication gives a brief historical review of the development of copyrights, ie the evolution of regulations in that area in Europe and the world. According to Breshkovski, the publication clarifies those parts of the Macedonian Law on Copyright and Related Rights which are important for the work of journalists and media workers.

“The promotion of copyright protection is important when it comes to respecting journalistic products by guaranteeing the ownership of journalistic texts, photographs, audio visual contents, columns, interviews and other journalistic products and the guarantee of the Material Rights of the journalist from his work,” Breshkovski said. He added that the analysis is intended for all stakeholders in the media sector, such as the justice sector and the general public, in order to increase the awareness of the importance of copyright in the creation and distribution of media content.

This analysis was made with the help of the Konrad Adenauer Foundation.

Journalistic organizations agreed on criteria for the online media