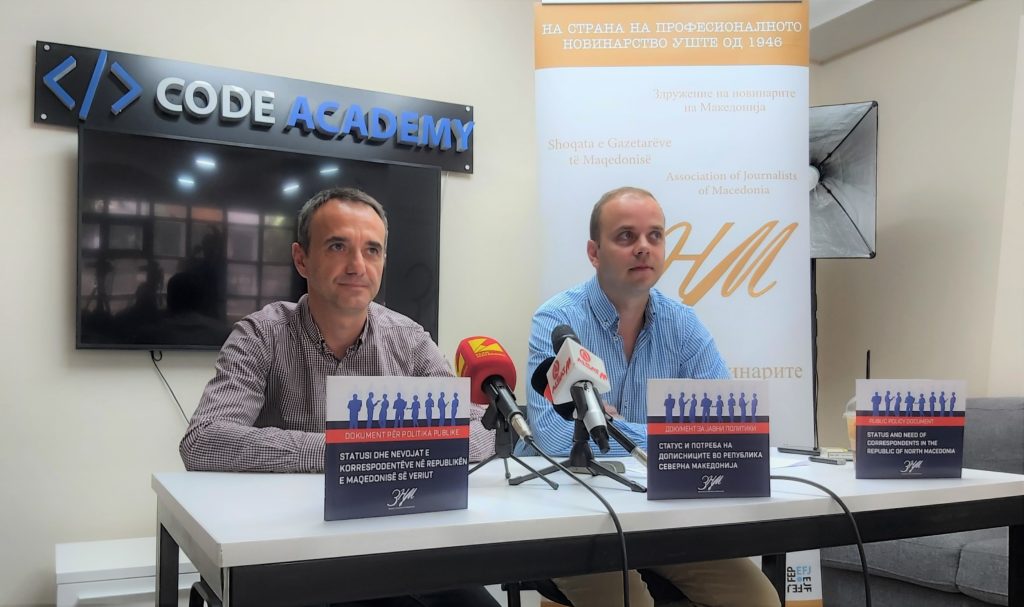 The Association of Journalists of Macedonia today promoted a new publication focusing on the situation of correspondents in the Republic of North Macedonia. The President of AJM, Mladen Chadikovski, spoke at the promotion and referred to the problems faced by colleagues from the smaller cities in the country. “The fact that MRT’s correspondent network, as well as national televisions are constantly decreasing, is worrying, and in certain media it has been completely destroyed,” Chadikovski said.

According to him, there are several reasons for this situation. “The finances are a major problem for correspondents, and all researches on the socioeconomic status of correspondents show that monthly allowances or freelance fees can not even cover basic living expenses. But this is not the only problem identified in this research. Lack of technical equipment, pressures from the newsrooms, but also from local officials make it difficult for journalists to do their job,” said Chadikovski.

Chadikovski referred to a part of the analysis that emphasized the need for intervention in the legislation that would oblige all national media to employ correspondents. Some of the recommendations concerning the Macedonian Radio Television (MRT) and the Media Information Agency (MIA) were to open up correspondent centers in each of the eight planning regions, while providing employees with technical conditions for work and full-time employment, with a long term contract.

The analysis recommends that the print media employ at least three correspondents, since being financially supported by the public budget also carries its obligations in the interest of a well-informed public on topics of local and regional nature.

Regarding national terrestrial and cable television stations, the analysis recommends that they increase their correspondent networks, and provide appropriate working conditions for journalists. “Amendments should be made to the Rule-book on minimum technical, physical, financial and personnel conditions for obtaining a license for radio and television broadcasting in Chapter VI, Article 22 concerning the number and structure of staff. These changes should ensure that out of 30 journalists employed in the terrestrial media, at least 4 should be full-time correspondents, or from 10 journalists employed in cable TV stations at least 2 should be full-time correspondents,” said Chadikovski.

AJM and CMEM will create a register of professional online media

Journalists have to be more responsible when communicating through social media