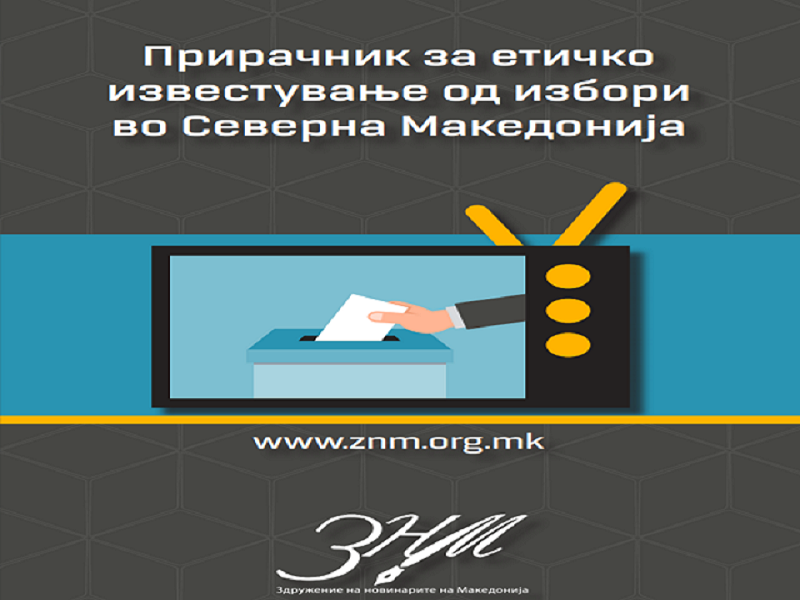 The Association of Journalists of Macedonia, on the eve of the upcoming parliamentary elections, has prepared a “Guide for Ethical Media Coverage of Elections in North Macedonia” which will help journalists and the media to better understand the ethical and legal aspects of election campaign coverage and Election Day.

The manual points out the importance of respecting ethical standards in reporting, as well as the role and importance of the media during the elections. In this regard, it is emphasized that the informative role of the media implies that they will cover the campaigns of all political parties in a balanced and correct manner, which would help the citizens to decide how to vote.

The publication is divided into four parts which, in addition to ethical standards, refer to ethical principles for fair and balanced televised debate with political opponents, international legal standards for freedom of expression and elections, as well as national rules for media coverage of electoral processes.

Authors of this publication are: Dr. Marina Tuneva on the part that refers to ethical standards and the role and importance of the media during the elections, then Mladen Chadikovski, in the part on ethical principles for the realization of a fair and balanced television debate with political opponents.

In addition to ethical principles in a special section M.Sc. Nasser Bislimi wrote about topics related to international legal standards for freedom of expression and choice, and M.Sc. Emilija Janevska elaborated on the topic of national rules for media coverage of electoral processes.

Editor of this publication is Dragan Sekulovski, the Executive Director of AJM, who also made recommendations in behalf of the Association of Journalists of Macedonia in the context of the proposed amendments to the Electoral Code.

This publication was supported by the International Foundation for Electoral Systems (IFES) with the support of the American people through the United States Agency for International Development (USAID) and the OSCE Office for Democratic Institutions and Human Rights (ODIHR). The content of this publication is the sole responsibility of AJM and the authors and in no way can it be considered to reflect the position of USAID or the Government of the United States, IFES, or ODIHR.

Appeal to all participants of the elections: journalists must work in safe conditions