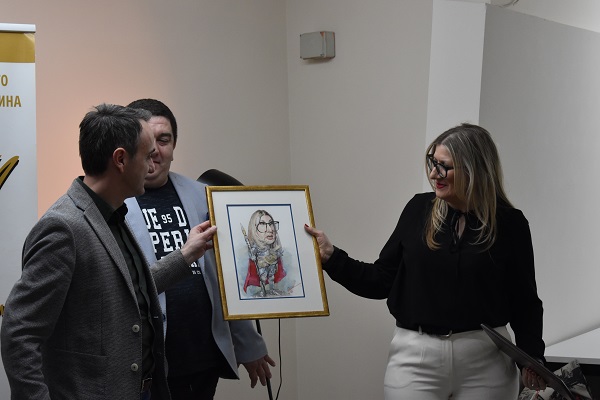 On the occasion of the 73rd anniversary of the establishment of the Association of Journalists of Macedonia, today were presented the winners of the annual journalistic awards of AJM. This year, besides the Lifetime Achievement Award and the Prize for Investigative Journalism, a prize for best journalistic reporting on topics of local and regional significance for 2018 by journalists from the interior of Macedonia was awarded.

Recipient of the award “Krste Petkov Misirkov” for lifetime achievement was the journalist of Nova TV Menche Atanasova Tochi, while the “Yashar Erebara” award for investigative journalism was shared by the journalist of Television 24 Vesti Sunai Sabrioski and Irena Mulachka, a journalist in the weekly newspaper Fokus. Suzana Miceva and Svetlana Darudova won awards for best journalistic coverage of topics of local and regional significance for 2018 by journalists from the interior of Macedonia.

The President of AJM Mladen Cadikovski addressed the awarding ceremony and congratulated the awardees and said that this year there were a lot of applications for journalistic awards, and among those who applied there were many young journalists.

“This year we decided to give more awards, I and the other members of the Managing Board of AJM decided to give another award, which is the award for stories of significant importance for local and regional development in order to encourage investigative journalism in the smaller cities of Macedonia,” said Chadikovski.

Regarding the fund for the awards, Chadikovski said that this year AJM provided the necessary funds in cooperation with the Economic Chamber of Macedonia. According to him, these awards should give a positive example that should be followed by all the other colleagues in their work.