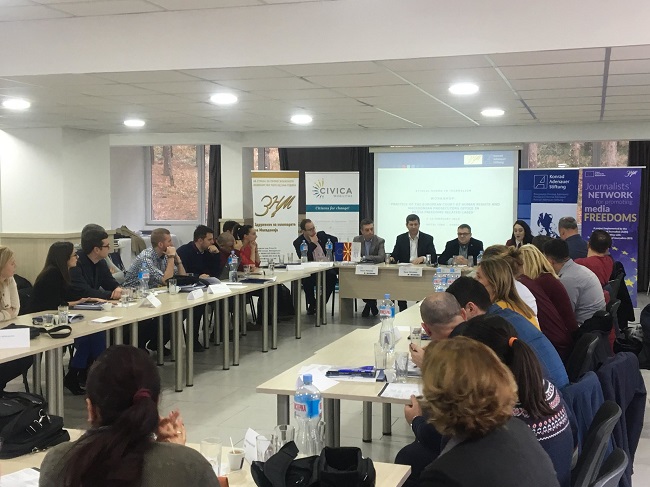 The Association of Journalists of Macedonia held a two-day training  between the  8th  and 10th of February, titled: “The Practice of the European Court of Human Rights and the Public Prosecution of Macedonia with cases of media freedom“.

On the training, journalists, lawyers and public prosecutors had the opportunity to learn more about “freedom of expression” from Dr. Mirjana Lazarova Trajkovska – ex-ECHR judge, Ivana Trajceva – Public Prosecutor, Elizabeta Nedanovska-PR advisor at the Public Prosecution.

According to AJM, this type of training sessions helps to improve co-operation between journalists and Public Prosecutor’s by examining cases related to freedom of expression. The President of AJM, Naser Selmani, addressed the participants of the training and pointed out that only well-trained journalists familiar with their rights and responsibilities can professionally perform the journalistic profession.

The French Ambassador to Macedonia, H.E. Christian Thimonier, also addressed the participants. He said that defending the principles contained in the European Convention for Human Rights should always be set as a priority in both journalism and the judiciary, because they are based on European values.

„The internet is becoming more important as a platform for sharing and receiving information, on day-by-day bases, ergo for the freedom of speech, which is why we need journalists that will do their work professionally in accordance with the main ethical principles. Of course, this applies to judges, prosecutors and lawyers, or they risk creating a disorganised ether of information similar to a jungle”, he said.

The representative of the Foundation Conrad Adenauer, Davor Pasoski said that the Foundation is an old partner of the AJM and he announced that during the year he expects to organize few other joint activities as well.

This training was organized with the help of the Foundation Konrad Adenauer, European Union and the French Embassy in Macedonia.