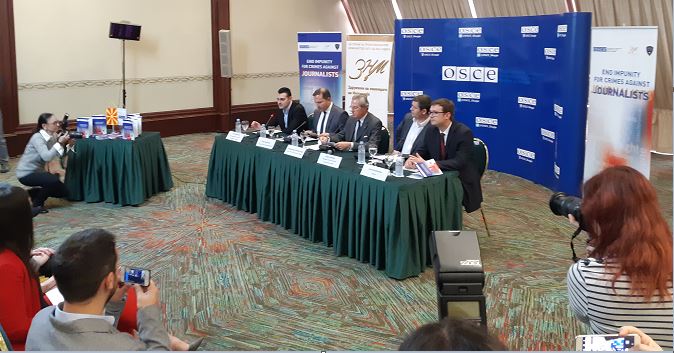 The mission of the Organization for Security and Co-operation in Europe in Skopje in cooperation with the Association of Journalists of Macedonia and the Ministry of Interior of Macedonia organized an event to mark the 2nd of November, International Day to End Impunity for Crimes against Journalists. On the event spoke the Head of the OSCE Mission to Skopje, Ambassador Clemens Koja, the Minister of Interior, Oliver Spasovski and the President of the AJM, Naser Selmani. During the event was also promoted a Manual on the safety of journalists for reporting from high-risk events.

In addition you can read the integral speech of the President of AJM:

– Today on the International Day to End Impunity for Crimes Against Journalists, we recall the frightening trend of violence against journalists. This year, 47 journalists were killed in the world, three of them on European soil. Most of these brutal murders are unsolved, and killers are still on freedom. We deeply regret the lost lives of our colleagues and worship before their sacrifice in the name of the journalistic profession, which always desperately searches for the truth.

In Macedonia we do not have a killed a journalist, but that does not mean that the institutions should not take seriously all threats to journalists. No one believed that in Slovakia or Bulgaria, member stated of the European Union, journalist could be killed, but unfortunately this happened.

The safety of journalists in Macedonia is slowly improving. The number of attacks compared to the previous year dropped from 18 to 6, and institutions after a decade actualy began to punish the attackers of journalists. For a physical attack on a journalist, the Basic Court in Skopje pronounced a prison sentence, while the Basic Court in Struga financialy fined the attackers of a journalist. The MoI fulfilled its promise to publish a report on all the attacks that had taken place over the past five years, and at the same time reacted more quickly to any new attack.

Except for these positive examples, unfortunately, the policy of impunity for attacks against journalists in Macedonia still has deep roots. The political will of the Government and Minister Spasovski to put an end to the attacks on journalists is not followed by the bureaucracy in the police and the prosecution. They still conduct poor and ineffective investigations. From police’s and prosecution’s reports, you can understand that out of 59 attacks on journalists, only two attackers were punished with an effective punishment, and only one other case has been fully investigated for by the prosecution.

13 cases are completely unsolved, which the police claims they can hardly be solved because poor investigations were conducted in the past and in some cases even the evidences were destroyed. If these cases can not be solved, the MoI can initiate proceedings against members of the police who conducted bad investigations or hid evidence.

And those cases that the police treated as investigated, are actually unsolved or were not fully investigated. For example, the Ministry of Interior filed seven criminal charges against journalists attackers, and the prosecution accepted only one. The remaining charges were rejected because the investigations were incomplete. The police has not even managed to identify the attackers. Similar fate have also the police’s reports to the Misdemeanor Courts.

To make the situation even more serious, certain structures in the police are solidifying with their colleagues who attacked journalists. Such is the case of a policeman who beated a journalist during a protest two years ago. It was established that he overstepped the powers, but the MoI instead of initiating a procedure to the prosecution, they submitted only a notification.

There are similar examples of poor investigations conducted by the Prosecution. Nine months were not enough for one prosecutor to complete the investigation against a person who in March sent out explicit death threats against a journalist.

We are also seriously concerned about the arbitrary detention of journalists by the police. Such a practice must immediately stop because it may have a chilling effect on the freedom of the media.

I want to urge once again the institutions to seriously and effectively investigate all attacks on journalists and to punish all the attackers. Without such an attitude of the institutions, the attacks will continue and eventually will become more brutal, which can compromise journalists’ lives.

Institutions should understand that an attack on a journalist at the same time is an attack on freedom of speech, the right of citizens to be informed and democracy in general.

The authorities’ obligation is to ensure a safe working environment for journalists, freed from any threats and pressures.

In the end, I would like to emphasize that we, as Association of Journalists, are ready to continue our cooperation with all the institutions in the country in order to end the attacks on journalists and to improve their security and the state of the media freedom in Macedonia in general.