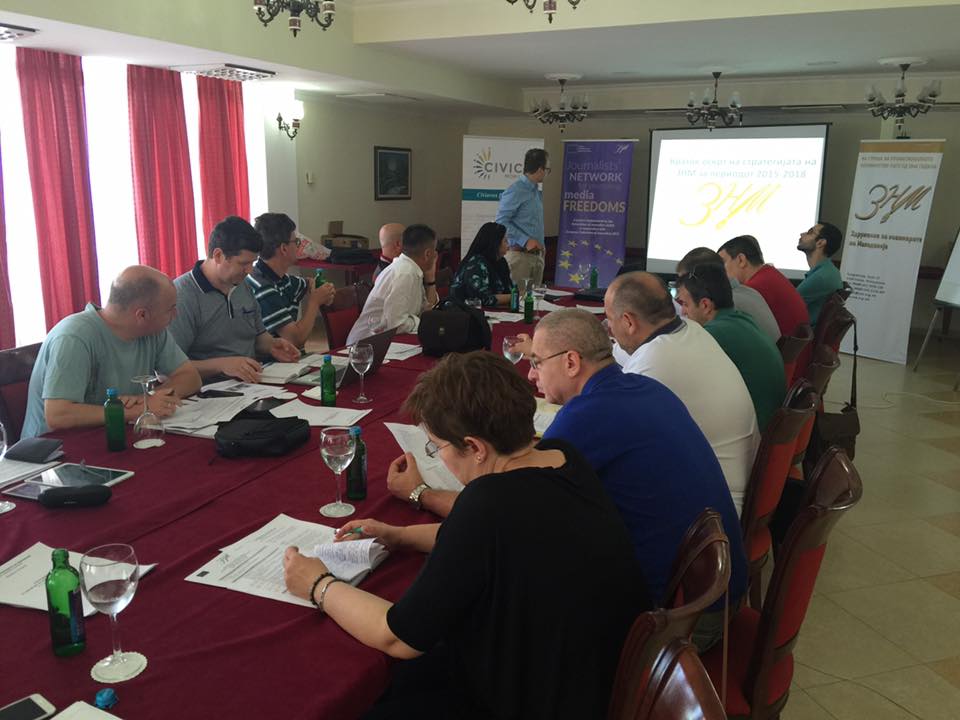 The Association of Journalists of Macedonia last weekend at hotel “Inex” in Ohrid, in the framework of the project funded by the European Commission, “Network of Journalists for Freedom of the Media” organized a strategic workshop of members of all governing bodies of AJM and the Journalists Forum.

The purpose of the workshop was to analyze the results and to propose concrete steps to deal more effectively with future challenges. The debate focused on three strategic objectives, increaving trust in journalists, strengthening solidarity between journalists and protection and promotion of professional standards.

The Strategic Plan was presented by the Director of AJM Dragan Sekulovski so far President Naser Selmani talked about its importance. He said that the document contains the vision, mission and key objectives and activities of AJM and will be an essential guide to the leadership and membership of the Association.

The release of Kezarovski and collecting donations for “Focus”, from the participants of the discussion were singled out as positive examples of journalistic solidarity led by AJM, but new measures were identified in the future to further strengthen solidarity among journalists.

The second day of the workshop was devoted to lobbying by AJM for improving media legislation and self-regulation in the media.

Selmani said that the requirements of AJM for media reform apart from being supported by the journalistic and media profession they are supported by the international community and the opposition. According to him, it is a good basis for increasing pressure on the government to accept that the Macedonian Radio TV should be a public service to the citizens and the Agency for media be independent. Of the present partisipants it was concluded that AJM successfully lobbied for improved media legislation and called for continued pressure on the institutions for reform.

Strengthening of self-regulation of the media was the last question for discussion in the workshop. It was stressed that the establishment of the Council for Ethics in the media should not paralyze the Council of Honor of AJM. According to them, the Council of honor should be even more active to publicly respond to all violations of the Code of journalists.

AJM requires true reforms in the media from the political parties

AJM has left the briefing of Minister Tomovska