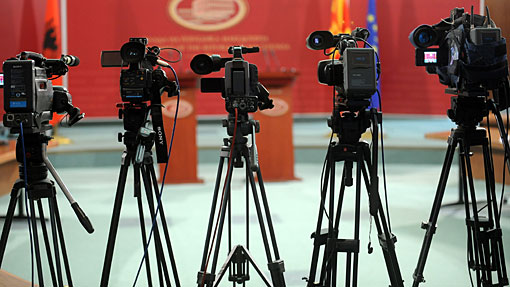 The Association of Journalists of Macedonia reacts to the latest amendments to the Law on Audio and Audiovisual Media Services (LAAMS) and the Electoral Code, which were adopted on the 4th of February in a shortened procedure by the Macedonian Parliament, without consulting the journalistic community.

Amendments to the LAAMS that refer to Article 102 in the part of the ban on advertising provide the opportunity for the public institutions at central and local level to continue to finance the broadcasters, in case if they have signed cooperation agreements that are valid even after this Law enters in force. This leaves room for this article of the law to be easily misused and in future public funds to be to the media, despite the declarative ban.

We remind that for the same article of the Law with the amendments of 31.12.2018, AJM also had criticism, because according to the new definition, public institutions should not plan funds for private media, but there isn’t a pronounced prohibition on using public money in the media. This leaves the possibility of continuing the clientistic attitude of the central and local government to the media, especially considering that no punishment for violation of this article is envisaged.

The latest changes confirm AJM’s suspicion that the Government continues to intend to finance private broadcasters without any criteria, which puts a question mark on the independence of the editorial policy of these media.

We remind that the Electoral Code in the part of the election campaigns stipulates that the political campaigns will be paid to the private media directly from the budget of the Republic of Macedonia. Our demands are consistent and clear, that as long as political campaigns are paid with public money to the private media, the independence of the media and the way in which they present the candidates to the public in the election campaign will be jeopardized, and this can affect the election results.

At the same time, AJM welcomes the amendments to the Election Code that refer to online media, which deprives the State Election Commission of its competence to monitor the work of the online media during the election campaigns. These changes are in line with the previous AJM recommendations, but also with the recommendations of the Council of Europe, according to which there is no methodology under which the state can evaluate whether online media are (un)professional in the way they report on election processes.

AJM: We condemn the attacks on the newspaper Zaman-Macedonia

Ministers should learn how to communicate with journalists