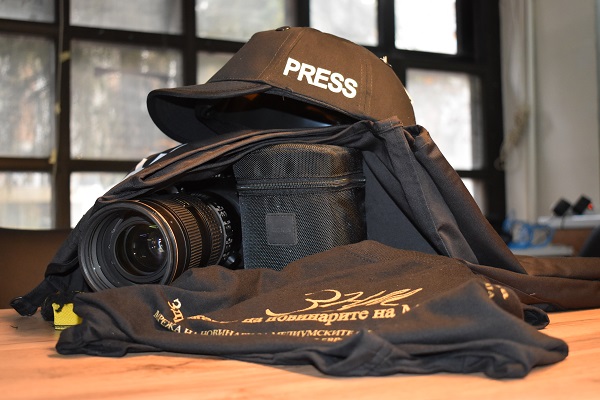 The Association of Journalists of Macedonia, in cooperation with the OSCE Mission to Skopje, distributed protective equipment, such as protective vests and caps for journalists and photo-reporters reporting from high-risk events.

The protective equipment was provided within the project implemented by the AJM and the OSCE Mission in Skopje during last year, and in the next few weeks the Association will ensure that almost every media in the country that sends journalists to cover high risk events will receive protective equipment.

The President of the Association of Journalists of Macedonia, Mladen Chadikovski, spoke at the event and expressed gratitude to the OSCE for the support it gives to the AJM in the fight for greater safety of journalists. “Last year seven workshops were organized, five of which were in the smaller cities of the country and two in Skopje, and they were attended by over 100 journalists and members of the police,” said Chadikovski. He said that in addition to the trainings, a manual was published this year, which will serve for better understanding between police and journalists in order to have a better informed public and safe journalists. Chadikovski said that there should be greater cooperation with the OSCE in the future as there is still a lot of work to do in order to improve the situation with the freedom of the media and the safety of journalists.

In addition to providing safety equipment for journalists, a free telephone helpline for reporting threats against journalists and media workers was promoted at the event. It will function in the next two years within the cooperation between the Independent Trade Union of Journalists and Media Workers (SSNM) and the OSCE Mission to Skopje.

The deputy head of the OSCE Mission to Skopje, Jeff Goldstein, said that any journalist who faces a threat or danger or finds himself in an undesirable situation will be able to contact the trained operators and receive guidance on how to protect, and how to report the attack.

“Today we present you the safety vests and protective caps for journalists that we have provided to AJM who will distribute them to journalists and media in order for them to be at least a little bit more secure and clearly marked as representatives of journalism,” he said.

The President of SSNM, Dzvezdan Georgievski said that part of the workers’ rights of journalists is to work in appropriate conditions, without threats and intimidation. “It is crucial for our colleagues to provide assistance when faced with any kind of violence,” he said. He added that when journalists report an attack on the free telephone line (0800-11-011), the Trade Union will not only register the attack, but it will provide assistance related to reporting the violence to the relevant institutions, will provide advice on how to defend themselves in the given situation, how to respond to intimidation, etc.