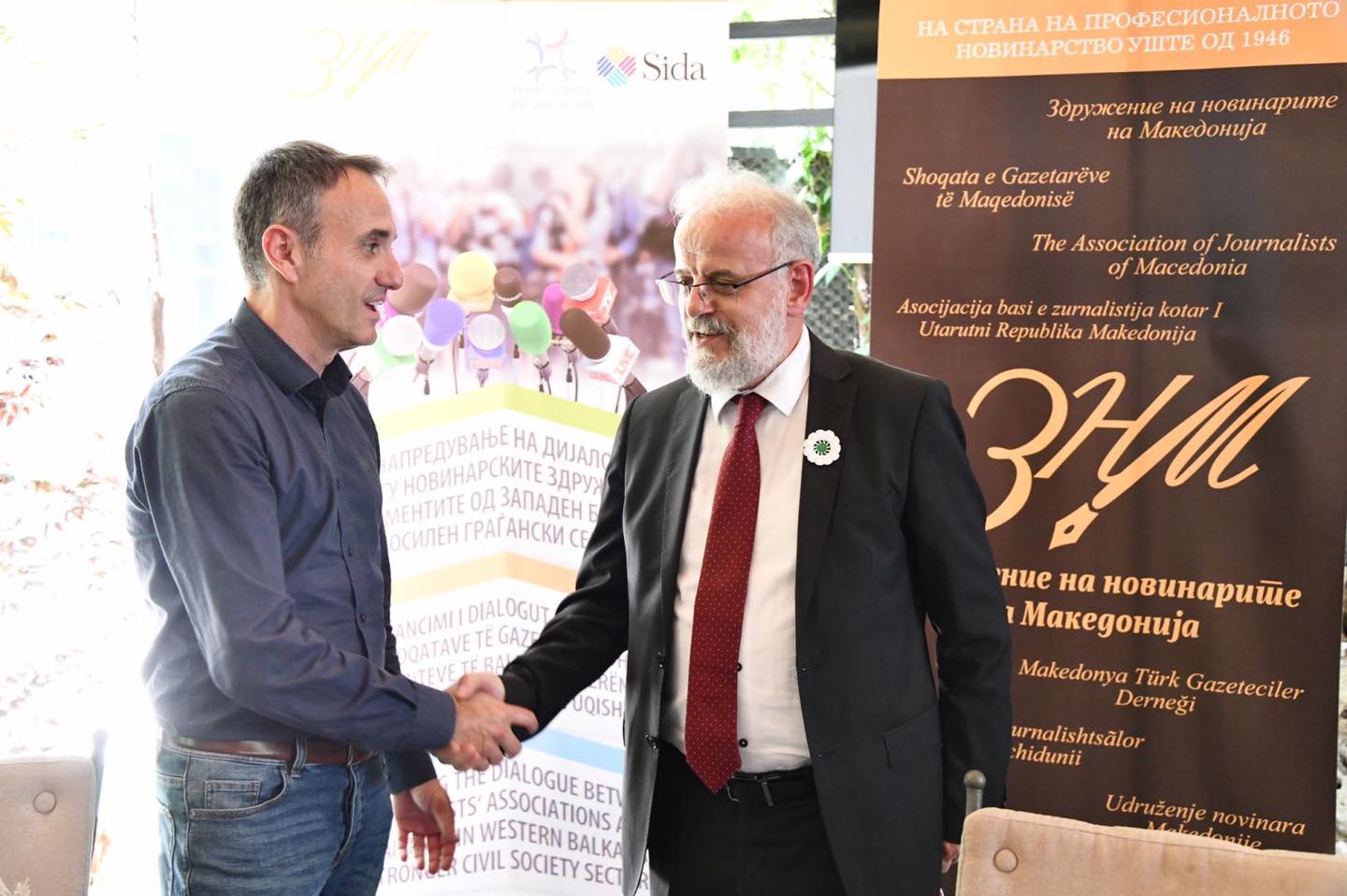 At the initiative of representatives of the Association of Journalists of Macedonia (AJM), a working meeting was organized with the President of the Assembly Mr. Talat Xhaferi and parliamentary groups as well as independent MPs on topics related to media policies, media reforms with emphasis on regulation. Media reforms and several laws relevant to the work of journalists are crucial to the country’s European integration processes, as noted in the European Commission’s latest report, which states that “the country should make efforts to improve independence and professional standards of the public service broadcaster and its financial independence”. On the other hand, transparent and fair election of the members in the media regulator bodies as well as in MRT is expected, based on their expertise.

At this event, in his welcoming address, the President of the Association of Journalists of Macedonia (AJM), Mladen Chadikovski welcomed the interest and motivation of the MPs present, coordinators of parliamentary groups, independent MPs who with their presence at this event express a desire to actively take part in discussion for media policies, and media reforms in our country. Chadikovski pointed out that the Assembly needs to be as transparent as possible to journalists and media workers and the practice of President Xhaferi to have regular briefings is good and it should be followed by the coordinators of the parliamentary groups and all MPs. “This is the first meeting of this kind organized by AJM and through such events it is expected to improve communication between MPs and Parliament, but also to raise awareness for the need for quality laws that regulate the work of the media,” said Chadikovski.

In his address, President Talat Xhaferi appreciated the invitation and praised the initiative of AJM, which provides opportunity jointly to discuss important issues affecting journalists, all stakeholders in the entire media space and MPs in the Assembly of the Republic of Northern Macedonia. “The Assembly and me, personally are always open and accessible to you, to the citizens, to the non-governmental organizations and of course, to the international organizations. I am personally, always available to you and your phone calls, without protocols, without announcements. We have to focus on the European integration processes, I would add with strong reforms in the entire media space, as a seventh force that has extremely great power in building, directing, argumentation or alleged “argumentation” and then making decisions among the general public and its opinion” – Xhaferi pointed out.

The meeting was followed by constructive debate aimed at further improving the transparency of the Assembly, especially in times of crisis, such as the current pandemic where due to health measures the access of journalists to the work of the Assembly was limited.

Constant two-way communication, openness and accessibility is needed from all participants in the Assembly and from the media, in order citizens always to receive accurate and timely information was one of the conclusions from the joint discussion. This was the first meeting in this format and as of September, AJM will initiate the organization of regional conference with MPs from the Western Balkans where comparative experiences will be shared regarding the communication of the national assemblies and the journalists and media. The event was organized in Skopje on July 9, 2021. within the regional project “Improving the dialogue between journalists’ associations and parliaments in the Western Balkans for a stronger civil society sector”, funded by Sida through the project “Protecting Civic Space- Regional Civil Society Development Hub” implemented by the Balkan Civil Society Development Network (BCSDN).