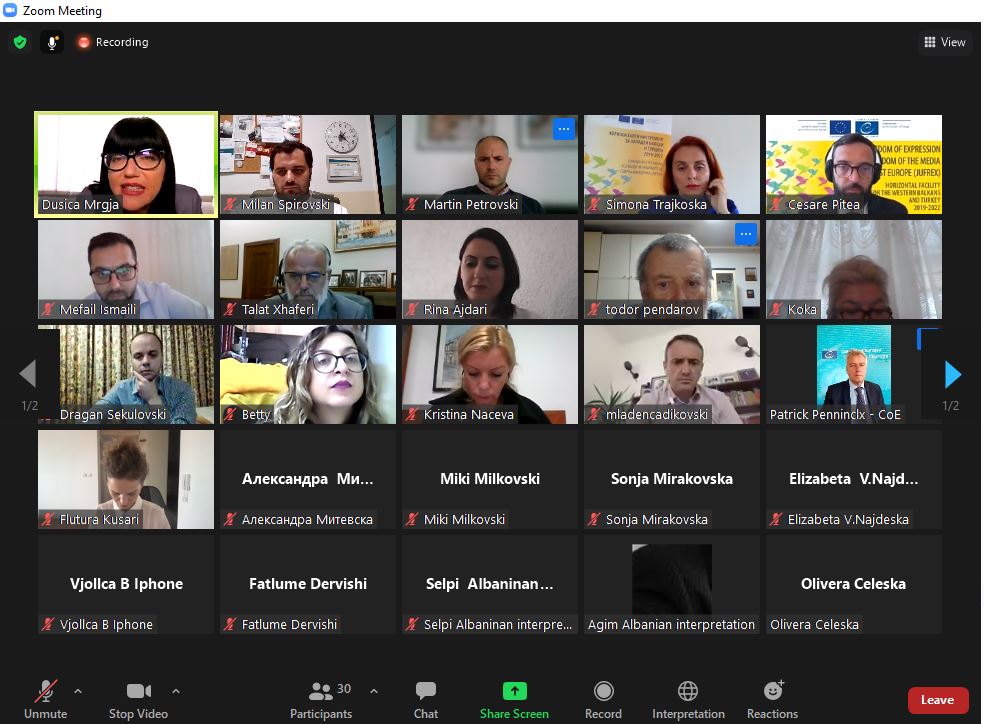 “Improving the cooperation between parliamentarians and journalists for greater accountability and transparency” was the cross-sectoral event held on October 1, organized by the Association of Journalists of Macedonia (AJM) and attended by journalists, MPs, Secretariat of the Assembly of the North Macedonia and representatives of civil society organizations active in advocating for freedom of expression.

This webinar was follow up on the new policy paper in which two experienced journalists, engaged by AJM who did research and assessment of the state of cooperation between parliamentarians and journalists and formulated recommendations on how to improve the promotion of the legal framework in the media sector.

The webinar was opened by the moderator, the journalist Dusica Mrgja, who greeted the audience, presented the agenda, announced the speakers and shared the context with her views on the topic before the audience.

In the welcoming address, AJM President Mladen Chadikovski said that media reforms and several laws important for the work of journalists are crucial for the country’s European integration process, which is noted in the latest report of the European Commission which states that “the state should make an effort to improve the independence and professional standards of the public service broadcaster and its financial independence.” The key recommendations and findings of the survey will provide journalists and parliamentarians with an exchange forum, which in turn will prepare the ground for strengthening the cross-sectoral alliance and ensure further cooperation between these key stakeholders.

The President of the Assembly of RNM, Mr. Talat Xhaferi also addressed the audience and said that the common position of the Presidency is that the Assembly should always be open and accessible to all journalists, and through journalists and citizens, to non-governmental organizations and in addition, the international public. He stressed his availability to journalists, especially at the established monthly briefings in order to provide accurate and timely information, but also said that he could not influence his fellow MPs in terms of their availability and desire to be exposed in the media. He said that there are plans to upgrade the website of the Assembly, following the example of the Estonian Parliament and he is convinced that all these activities that are planned for the next period, will bring the legislature closer to journalists, citizens and the entire international public and will improve the impression on the Assembly of the Republic of North Macedonia.

Patrick Pennings, the Head of the Council of Europe’s Information Society Division, as third person that addressed the audience said that freedom of expression and the protection of journalists were intricately linked to other areas such as data protection, cybercrime and artificial intelligence. All these points are interrelated with freedom of expression. The protecting of freedom of speech and the absence of pressure on the media is crucial, as is the Assembly’s openness to the media. Timely and exact information by journalists contributes citizens to be part of the democratic process, i.e., to take part in it.

The other speakers, representatives of the journalists and the Assembly, agreed that there is progress but the work of this institution in terms of cooperation. However, the journalists stressed the need for improvement in this sector, especially during the Covid – 19 pandemic which completely excluded the media from parliamentary sessions. For this purpose, a proposal was made to broadcast the sessions in real time, instead of sending videos and reports with delays.

Apart from the journalists Aleksandra Mitevska and Mefail Ismaili, the experienced parliamentary rapporteur Todor Pendarov also addressed the audience speaker, as well as the foreign consultant Flutura Kusari and Edip Biljali, the director of NDI.

The representatives of the Assembly stated that in recent years there has been an improvement of the website where in addition to the current information, there is also a calendar that shows all scheduled sessions. They also reminded that they are currently working on a complementary website intended for journalists. We are also working on the idea of ​​making parliamentary software that will generate real-time speech from the videos.

CONCLUSIONS FROM THE ANALYSIS

Transparency of the Assembly of the Republic of North Macedonia during the covid-19 pandemic.

The conclusions from the conducted analysis clarify that the COVID-19 crisis further highlighted the weaknesses in the functioning of the legislature in terms of transparency, accountability, and communication with the media, which were previously hidden behind the constitutional procedure and rules of procedure for openness and publicity in the work of Assembly. The recommendations say that it is necessary to analyse all possibilities for opening committees to the public, to consider proper training for parliamentarians in the field of public relations, to consider the possibility for setting up a practice for periodic or regular briefings. These are just some of the conclusions and recommendations stated in the analysis of the transparency of the Assembly of the Republic of North Macedonia during the COVID-19 pandemic.

For more information on the analysis – click on the link.

The webinar was organized by the Association of Journalists of Macedonia (AJM) and the Council of Europe on the topic HF II – HF 37: Freedom of expression and freedom of the media in North Macedonia (JUFREX 2) – Improving cooperation between parliamentarians and journalists for greater accountability and transparency.